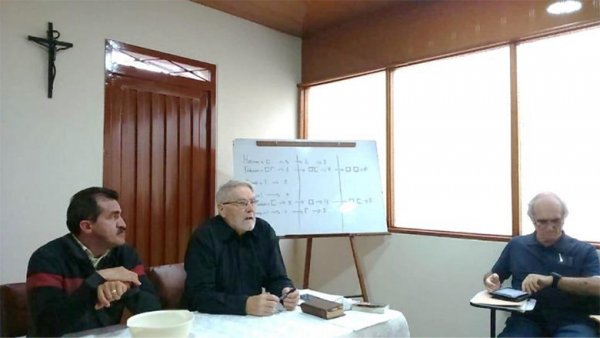 “A community is made up of persons who differ in their capabilities, duties, and circumstances. This diversity manifests the wealth of the gifts of the one Spirit. … Each religious, whether young or old, sick or healthy, is fully a member of his community.” RL 8“

On 13-18 January this year, the religious of the Province of San Juan XXIII gathered in the Provincial House of the neighbourhood Las Ferias to begin our 2020 Assembly-Retreat. We began with the sharing of lunch, a pleasant and meeting time.

After sharing with the brothers, we went to the Rosal Cundinamarca at the Monastery of the Benedictine Fathers to start the annual retreat. This time we were accompanied by Monsignor Francisco Nieto, bishop of the Diocese of Engativá. The theme that focused our reflection was from the Encyclical Letter “Laudato si” (Pope Francis, 2015) with consideration of the situation of ecology and focused on the Eucharist.

Monsignor Francisco drew out some axes that the encyclical deals with and that directs us to read the situation of ecology in the light of the Eucharist: the poor and the fragility of the ecosystem, the interrelation of all aspects of the world, technological power, other forms of progress, self-worth of all Christians, the ecology of man, ethical sense. These were among other topics that we delved into. On the last day of the retreat, we touched on the theme of the Synod of the Amazon, a “Synod of the emergency”. Here, Monsignor Francisco insisted on some very important aspects: why the Synod is the Synod of emergency, the Amazon is decisive for the future of the planet, the ecological disaster and its causes, the degradation of the conditions of human life, the pace of consumption, waste and deterioration of the environment which has exceeded the possibilities of the planet, among other issues addressed in his interventions. Thanks to Monsignor Francisco for making us aware of our common home and care of nature. 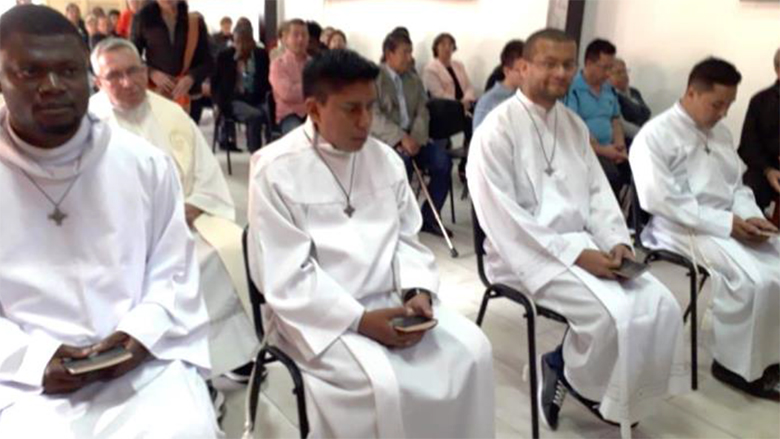 Upon returning to the Provincial House, the 2020 Assembly began. The assembly opened with logistics, report of the Provincial, message from Father General. We ended this moment by sharing a fraternal dinner.

On Thursday our reflection focused on looking at our progress as a province, reviewing the 2018-2022 provincial project, while in the afternoon we considered the Blessed Sacrament Eucharistic mission in America, presentation of the documents and the problematic issues.

For the last day of our assembly, our programme treated everything related to the economy of the province, vocation ministry, first formation, International Scholasticate. Those responsible for each of these areas gave their respective reports. It must be said that much emphasis was placed on vocation ministry since it is a concern of the Church and of the Province. The theme of the Blessed Sacrament laity was also emphasized.

In the afternoon we were occupied by several matters: the CLAS, composition of the communities, holidays of the religious, the Notibip and finally an evaluation of our retreat and assembly. The day ended with the celebration of the Eucharist of Thanksgiving. It was presided by Father Camilo Gagnon, the present provincial.

On Saturday we were invited by a Corpus Christi parishioner to meet at her farm in a town called Sasaima. There we had a swim and shared a delicious lunch prepared by Father Camilo with the help of some brothers. Thank you.

On Sunday in the chapel Our Lady of the Blessed Sacrament, four brothers renewed their vows: Elibien, Wilmer, Juan David, and Nelson. May God continue to bless them and fill them with grace. The Eucharist was presided by Father José Antonio Rivera Ruiz, who is the Vicar General and Consultor responsible for Latin America. We are grateful for his visit and the contributions he has been making to our province. He expressed this invitation to us: “Do not be afraid to open your heart to God. Humility is the door to understand our call.”

Tweet
Published in News
More in this category: « Formation Session on Father Eymard and his Complete Works By the hand of Mary, in the lands of St. Peter Julian Eymard »
back to top