The Superior General exercises his authority at the service of the congregation’s unity and its mission in the world in conformity with the norms of the Rule of Life. In union with his council, he animates and coordinates the life and mission of the Institute. (RoL  73, 74) 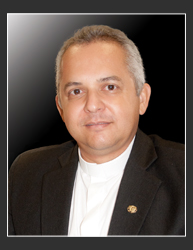 1960:     Born on the 5th of September in Araguari, Triangulo Miniero (Diocese of Uberlândia), Minas Gerais, Brazil.  His father Manuel Martins de Sousa and mother Beatriz Barbosa Martins both hail from Minas Gerais. He has two elder sisters (Teresinha and Lúcia) and a younger sister (Ângela).

1971:      He continued and finished his elementary studies at Escola Estadual Prof. Antonio Marques.

1974:     He proceeded in his academic studies at Colegio Dr. Jose Ferreira.

1976:     He completed his secondary years at Escola Estadual Castelo Branco.

1981:      He took his philosophy studies in Faculdade Mosteiro São Bento in São Paolo.

1983:     He entered the Blessed Sacrament Novitiate in Belo Horizonte.

1984-1987:    He studied theology at the Instituto Teológico in São Paolo (ITESP). He had his pastoral formation in Paroquia São Pedro Apostolo in Taboão, San Bernardo do Campo in Diadema.

1987:     15th of February – he made his profession of perpetual religious vows in Escolasticado SSS in Diadema.

3rd of May – he was ordained deacon by Bp. Claudio Hummes in Taboão, San Bernardo do Campo in Diadema.

1988:     24th of January – he was ordained to the priesthood by Bp. Claudio Hummes in Santuário N. Sra. D’Abadia in Uberaba, Minas Gerais.

2010-2011:    Provincial Councillor and Provincial Treasurer of the Province of Santa Cruz, Brazil.

2017: 19th of June during the General Chapter held in Chicago U.S.A., he is re-elected Superior General.