Formation Session on Father Eymard and his Complete Works 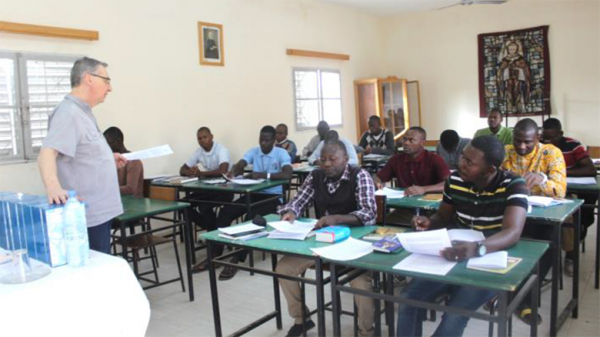 From 13 to 30 January 2020 the inter-African novitiate “le Cénacle” of Koudiadiène welcomed Father Manuel Barbiero sss who came to give a formation session to the novices on the Complete Works and Father Eymard. This was divided into three great moments, before which Father Manuel first tried to answer a question being asked within the Congregation: when can we say that Father Eymard became aware of his vocation as Founder? His intuition at Fourvière more or less marks the beginning of his reflection of an Order dedicated to Reparational Adoration. In a climate of discussion and conflicts of personalities between Miss Dubouché, Jean-Claude Colin, Herman Cohen and de Cuers, and the young men from Toulon, Father Eymard became aware of his role as founder on the eve of the foundation, the 13 May 1856. This marked the end of the first part of Father Manuel's intervention, followed by a question and answer session, after which Father Manuel began the second, most important part, of the session on the Complete Works.

Divided into 4 main sections, the 17 volumes represent almost all of Father Eymard's writings from the age of 12 until his death in 1868. It leaves us with enormous spiritual wealth. The first section, the Correspondence, contains the letters of Father Eymard. These letters help us to know Father Eymard as a spiritual director. The second section, Personal Notes, includes his personal retreats and other miscellaneous notes. The Constitutions and Statutes, the third section, gives us another aspect of our Founder, Father Eymard as legislator. The fourth section contains the Preaching of Father Eymard and these sermons give us an overview of his evolution of Eucharistic thinking.

During the session, the parish of St Peter-Julian Eymard in Koudiadiene had the honour of hosting the meeting of priests of the North Deanery of which it is a part. This prompted Father Manuel to enlighten us on the main objectives and the reason why the Institute was approved by Rome on 3 June 1863: the communion of adults and the reception of priests in distress, two works which were unfortunately almost put aside by the Congregation. A day of recollection with the superiors of the SSS communities of Senegal, in which the novices participated, was animated by Father Manuel. Drawing his reflections from the Gospel of the day, he insisted on the central place of the poor, the abandoned and the needy in SSS missions today. After the day of recollection, there was a four-day break. During these days, Father Manuel visited the SSS communities in Dakar.

On returning to the novitiate, Father Manuel continued the third part of the session. This was mainly based on the history of the Congregation after the death of our Founder. Before starting this part, the whole novitiate watched a documentary on Saint Peter-Julian Eymard produced by the Commission for Father Eymard's Writings bearing the title Saint Peter-Julian Eymard: Sun of the Eucharist. This documentary was followed by a series of questions on different aspects of the Congregation, the current state of the SSS missions, the decisions of the last General Chapter and the importance and place of the Aggregation today.

In his final remarks, Father Manuel exhorted the whole community on the importance of reading Father Eymard today, on how to realise his thinking today. To do this, we must be keenly aware of the needs of people (keep our "antennas on alert") and have a good mastery of the main aspects of Eymardian spirituality. Thanking Father Manuel on behalf of the whole community, Father Abraham Faye, the master of novices, pointed out Father Manuel's promptitude to each call to the novitiate, his tireless zeal in making Father Eymard's writings known and accessible to all, then turning to the novices he stressed the importance of having a deep mastery of Father Eymard: "the main lines have been drawn, it is now up to you to personally continue your studies on the writings of the Founder." The novices (17 in number) expressed their total satisfaction and gratitude to Father Manuel in various forms. Father Manuel left the novitiate on 30 January to return to his community in Italy.

Tweet
Published in News
More in this category: « Latest SSS Ordinations Assembly-Retreat 2020 of the Province San Juan XXIII »
back to top