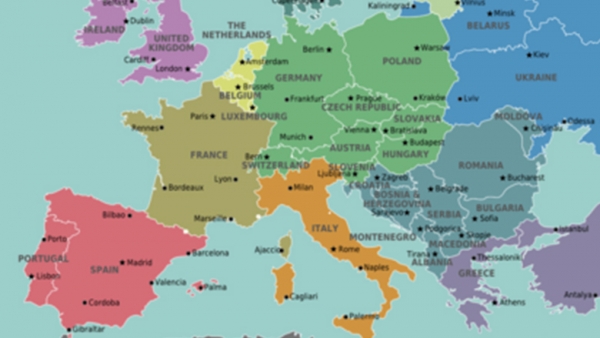 Europe comprises at present three Provinces: Our Lady of the Blessed Sacrament (Italy, Spain and South Tyrol), Saints Peter and Paul (England, Scotland, Ireland) and Saint Peter-Julian Eymard (Holland, Belgium, Germany, France, Switzerland and Mozambique). Annually there is a meeting of the Provincials, whereas every two years these are accompanied by a delegate from the Provincial Council. Communication is facilitated often by a translation.

The European Conference met in Paris on 28 and 29 January this year. The great renovation of the house (including the rooms) is complete. Everyone was welcomed by the present Superior.

Apart from various items, news was provided about the Provinces - among other things, how the Provincial Chapters were being prepared and what topics were to be dealt with.

Most of the time was devoted to the challenges we are facing in Europe.

For a long time we talked about the European novitiate. After years without a novice, currently there are two postulants in Holland, diocesan priests in their ’sixties. Italy could have a prospective candidate. At the General Chapter (Chicago 2017) the document "Follow-Me" was approved. This contains interesting matter regarding formation, but it was not written for candidates in the ’sixties!

Moreover, these persons do not speak French, whereas it was planned that the novitiate would be held in that language. Do we have to keep to this decision? If not, how is the novitiate to be considered? Is collaboration with other Congregations possible? Should we clearly distinguish the second year from the first? We would have liked to find solutions, but about this we are not yet there. We are going to begin a dialogue about this matter with the General Council.

We likewise discussed the question of the scholasticate, which so far is at San Claudio in Rome. But since the Italian Province has moved some religious, this raises the question now about whether it will be continued. The Eymard Province at present has a scholastic in Duren and the Province of Saints Peter and Paul has someone who would like to begin. But where?

Ongoing formation was also an item on the agenda. The Eymard Province has a Commission which for four years has sent to each community documentation in French and in Dutch for communal discussion and prayer. This year this will be focused on numbers 34-38 of Father McSweeney’s Commentary. Next year it is already planned that this will be on the “Ars celebrandi”. If you are interested in this you can contact the Provincial Fr. Maurits Gijsbrechts (This email address is being protected from spambots. You need JavaScript enabled to view it.).

A new development: some Provinces outside Europe have a community there. These communities are juridically under their Province of origin, but what contact can be made with the European Province where they are located? We must still think about it.

Finally, the President of the European Conference was re-elected for two years.

You are cordially invited to respond to this communication.

Last modified on Friday, 19 April 2019 10:17
Tweet
Published in News
More in this category: « Vocation News from Mozambique Echoes of the SSS presence in the Cameroons »
back to top