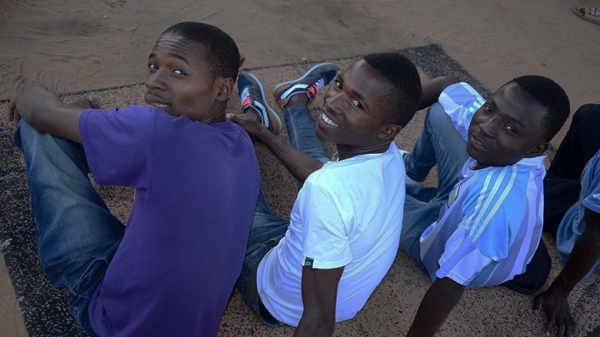 On 5 February 2019 at the Foyer we celebrated the official entry of our 6 youths into the postulancy programme. The Mass was presided by Father Agostinho Maholele sss in the presence of Father Geraldo Uaiare sss, the superior of Maputo, Father Humberto Kuijpers sss, formator of the Foyer and Brother Félix Florindo Tupasso sss, who is at present living at the Foyer as an assistant formator, as well as two members of the Aggregation. At the end of the celebration we shared a meal together.

The quest for their vocation as a Blessed Sacrament religious puts youth on the path towards the source. Thus, Domingos Guilherme José is among the youth of the first year at the St Peter-Julian Eymard Foyer. Domingos comes from Balama in the north of Mozambique, situated 2500 kilometres from Maputo. He made a journey taking 4 days by car and, according to what he said in an interview, he had a great deal of difficulty during his trip since this was the first time he was coming to Maputo. But, he wasn’t deterred. This is why he thanks God for leading him until he arrived at the St Peter-Julian Eymard Foyer in Maputo.

So at the Foyer we have 6 postulants and 15 aspirants, making a total of 21 youths living in three seminaries: 11 of them in the intermediate seminary, 7 at the major seminary of philosophy and 3 at the Superior Institute Of Mary, Mother of Africa (ISMMA). The region having most vocations in Mozambique is at the centre of the country, namely, the province of Zambézia. But, what is important is that we have students from all the regions at our Foyer, which is a richness.

Last modified on Friday, 08 March 2019 10:32
Tweet
Published in News
More in this category: « Father Jackson assumes Rectorship of the Eucharistic Shrine of Saint Peter-Julian Eymard in Sete Lagoas European Conference »
back to top