Auguste Rodin and Peter-Julian Eymard The sculptor and the saint 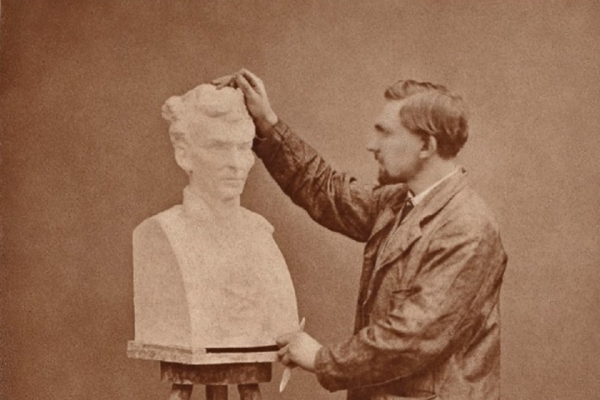 The celebrations for Rodin’s anniversary (see the site created for this occasion: www.rodin100.org) highlight the determining role that Father Eymard had in the artistic career of Rodin.

Auguste Rodin novice in the Congregation of the Blessed Sacrament 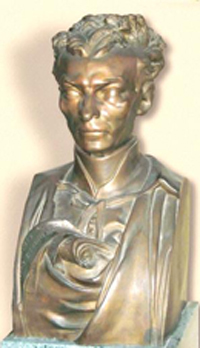 Auguste Rodin (1840-1917) is considered as the father of modern sculpture. Born on 12 November 1840 in Paris, he became an apprentice in the School of design.

Disturbed by the death of his sister Maria, a novice of the Sisters of Saint-Maur, on 8 December 1862, he was received by Father Eymard into his community. A little later he became a novice taking the name Brother Augustin. His mother, Marie, who used to often frequent the chapel of the Congregation of the Blessed Sacrament, asked for the help of Father Eymard, and the meeting between the two men was arranged.

Father Eymard quickly understood that Rodin did not have a clear vision of his vocation and encouraged him to persevere in his art, making available to him a shed in the garden as a workshop. Rodin made a bust of Father Eymard in 1863, which was one of his first works. We do not know if Father Eymard posed for him. We know that he would offer a plaster copy to Mother Marguerite Guillot in 1864. Father Eymard wrote to Mother Marguerite: “You may send me your letter by means of good Brother Augustine; that was a poor gift that he gave you.” (21 June 1864, CO 1412). The work was not satisfactory and was put in the attic.

Rodin stayed in the Congregation for five months before returning to secular life and carrying out his true vocation as a sculptor.

The bronze bust of Father Eymard is exposed in the Rodin museum.

Rodin’s meeting with Father Eymard was decisive in the following of his artistic career. 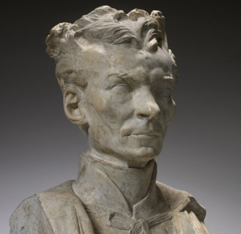 An article on “Auguste Rodin, a sculptor who does not fit into the mould” has a paragraph beginning by “God’s pupil”, stating: “Recall this name well: Father Eymard. Without this holy man, who knows if Auguste Rodin would have been able to free and share his genius at all? At 22, struck and distraught by his sister’s death, Auguste Rodin entered into a mystical crisis and joined the seminary of the Blessed Sacrament. One day, when the young Auguste had just carved the bust of Father Eymard, the man in question, amazed by so much talent, approached his young pupil and told him: ‘My son, you have better things to do in life than to be a priest. God has not called you to religion.’ Brother Auguste then put aside entering orders and began his career of being a sculptor. Thank you Father!” (www.expointhecity.com)

An article, published in the magazine Nouvelle Cité July-August 2017, put on Father Eymard’s lips the following words addressed to Rodin: “Draw, model, trim, shape… and give the world your soul through Beauty. I am a priest and I do not know how to do it… Some pray and save another person. Others paint, build or sculpt and make others better. Some are roots, others trunks and then there are all those who are branches, leaves, flowers and fruits”.

The bust of Father Eymard

For his portrait of Father Eymard, Rodin was inspired by the style of David d’Angers (1788-1856), a celebrated portraitist of the first half of the 19th century.

The shape of the buste en hermès (head and shoulders) and rigour of the attire contrast with the wavy hair and many sunken and dented features of the face. The message engraved on the coiled scroll – “Laudes ac gratiae sint omni momento sanctissimo ac divinissimo sacrament” (“Praise and thanks be at every moment to the most holy and divine Sacrament”) – recall Father Eymard’s prayer. The bushy eyebrows accentuate the determined look. The strands of hair, suggesting the “horns of the devil”, according to Father Eymard, explain the little affection that the ecclesiastic figure showed towards his bust.

Yet, we can say that the vivacity and vigour of the sculpture serve to express the spirituality of the model.

Last modified on Sunday, 29 October 2017 22:32
Tweet
Published in Archives
More in this category: « Annual Retreat of the Province of Sts. Peter and Paul Renewal of vows »
back to top