Annual Retreat of the Province of Sts. Peter and Paul 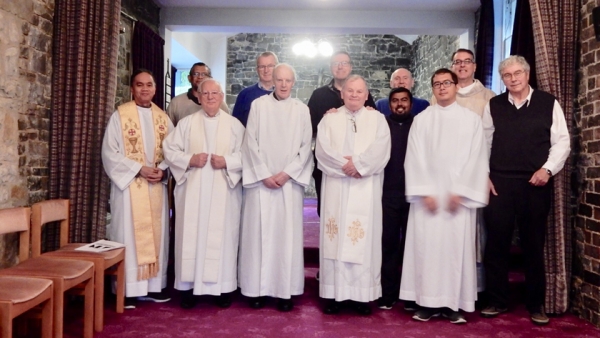 Days of recollection and annual retreats are part of the way of life of the Congregation of the Blessed Sacrament. As the Rule of Life says, these activities provide special occasions for renewal for all the religious in the congregation (see R.O.L. # 11, paragraph 2). It does rejuvenate the religious of the Province of Sts. Peter and Paul when they did their annual provincial retreat last 15th to 20th of October 2017. It was held in Noddfa, Penmaenmawr, North Wales, United Kingdom, a place conducive for prayer, contemplation and rest.

The retreat followed a daily routine that was composed of communal prayer and adoration, morning and afternoon conferences, communal meals, and celebration of the Eucharist. It was animated by Rev. Fr. John Thomas J. Lane, SSS, who is fondly called “JT”. He is the current Parish Priest of the St. Paschal Baylon Catholic Church in Cleveland, Ohio, in which, he also serves as the local superior. The theme of the retreat is “The Eight Beatitudes and the Eucharist.” Fr. JT discussed to the members of the province the relationship of the Beatitudes and the Eucharist. He also presented in his conferences the connection of the theme in the Rule of Life of the Congregation and in the letters and thoughts of Father Eymard. Most of all, he shared some personal experiences in his presentations that the Beatitudes and the Eucharist can be truly celebrated and lived by the present Blessed Sacrament fathers and brothers, as St. Peter Julian had done in his life .

The retreat is indeed a blessing to the province, which made all of us renewed in living the Eymardian Eucharistic Spirituality, because not only that we received new insights on how to live the Eucharistic life, but it gave the province a chance to see each other and gathered as one Eucharistic family – a way of reconnecting each other’s vocation of making the gift of self.

Tweet
Published in Archives
More in this category: « Celebrating 20 Years at the Eucharistic Banquet Auguste Rodin and Peter-Julian Eymard The sculptor and the saint »
back to top