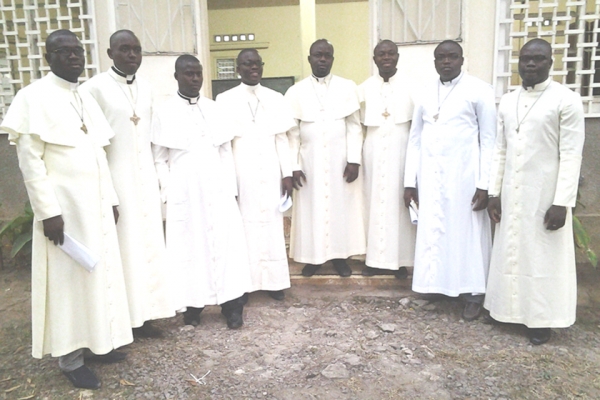 The Region of Cardinal Émile Biayenda (of Congo Brazzaville) had the joy of celebrating the renewal of vows of eight scholastics on Friday 8 September 2017, the Feast of the Nativity of the Virgin Mary, in the midst of the community of Barrage.

This prestigious ceremony of the renewal of vows was itself preceded by a spiritual retreat from 4 to 8 September. Guided by Father Casimir Moukouba sss, this retreat had the theme: Living religious life like the disciples of Emmaus. Thus, three important moments marked this precious time. Firstly, a careful consideration of the Founder’s vocation enabled emphasizing or evoking certain values and characteristic virtues of the Christian life, or better, of the religious life. Then, the retreat preacher insisted on what must be the profile of a religious of the Blessed Sacrament by recalling the challenges facing our mission in society; he also invited the scholastics to live always in a transparent way and to work for perfect brotherhood by feeling continually responsibly for others. Finally, the specificity or originality of the retreat consisted in the sharing of experience. Each scholastic had the opportunity to share his vocational journey, or better, the unfolding of his vocation.

As the Rule of Life n. 57 states: “The profession of temporary vows is annual and is renewed each year until perpetual profession”. In this perspective, eight scholastics renewed their vows - for the third time, Brothers Séverin Amos Mvouka, Ephrem Nsimba Mabika, Aurélien Nzitoukoulou, Chabrey Malonga, Jack Nkodia, Divin Maboundou; for the second time, Brother Chancelin Kifoueti; for the first time, Brother Orsini Batekouahou.

The Eucharistic celebration was presided by Father Brel Daouda Malela, the Regional Superior, in the presence also of Fathers Armand (Parish Priest of La Mure), Claude, Rodolphe, Aimé, Chally, Elois, Jean de Dieu, and Casimir. In his homily, the Regional Superior exhorted the professed to witness always to fruitfulness regarding our religious vocation; he also recalled the challenges of religious commitment and the meaning of the vows that we profess.

It is thus in a climate of fraternity and communion that the confreres present have assisted and supported the eight professed who had to renew their vows.

Tweet
Published in Archives
More in this category: « Auguste Rodin and Peter-Julian Eymard The sculptor and the saint First Religious Professions »
back to top