Meeting of the European Conference 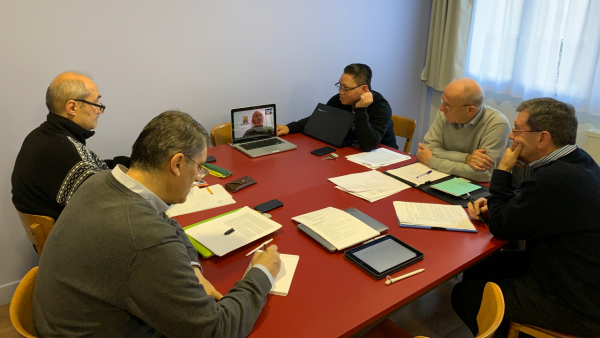 Due to the Covid-19 crisis, the two previous European Conference meetings in May were held via Zoom. But now we could meet in Paris on 9 and 10 November 2021 and each province had two delegates. The Provincial of the Province of Peter and Paul was connected via Zoom.

The two General Consultors, Jose-Antonio Rivera Ruiz and Joseph Vu Quoc Binh, had brought a letter from Father General in which he reflected on some of the items on our agenda.

An important point on the agenda was the mutual communication of the three provinces in Europe. How can we keep each other informed? We often talk about the concept of "internationality" in the Congregation and how we can live it in Europe first of all. Of course, language remains a problem: in the province of Peter and Paul the language is English, in the province of Our Lady of the Blessed Sacrament Italian and Spanish, and in the province of Eymard in Europe French, German and Dutch. But there are always possibilities for translation and there are even good translation programmes.

We still want to exchange the decisions of the provincial councils, as well as all the preparatory documents for the upcoming chapters.

Each province talked about the method they use to involve the religious and the Eymardian family in the chapter.

Primary and ongoing formation were also discussed. Fathers Hans van Schijndel and Manuel Barbiero both have experience in the formation of older candidates for the novitiate. They each wrote a reflection on our formation document "Follow Me" and the adaptations and additions for older candidates.

Each province has a commission for ongoing formation and material for this will also be distributed.

Another point were the statutes. How to simplify and adapt them to facilitate the responsibility for the good functioning of the European Conference. The main adjustments are the following:

Other items on the agenda were:

And as the last item on the agenda, we celebrated Joseph Binh's birthday.

Last modified on Friday, 24 December 2021 10:05
Tweet
Published in News
More in this category: « Do this in memory of Me (Lk 22:19c) Ordination to Deaconate and Priesthood in the Province of Vietnamese Martyrs »
back to top