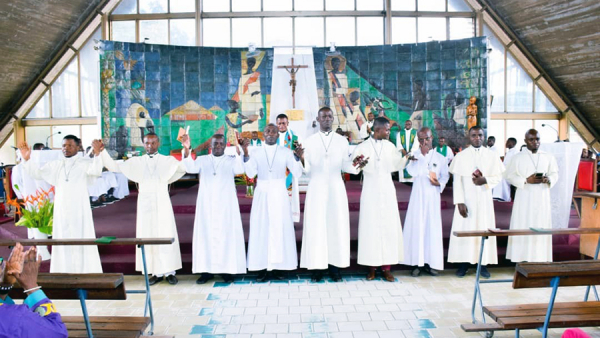 Published on 03/10/2020, Pope Francis’ the Encyclical Letter "Fratelli Tutti" (All Brothers) is intended to be both an appeal and a recommendation to build more fraternal and more human religious communities. The Pope in this encyclical sets out some markers which should help the brothers and sisters who live in the same community to regard themselves really as Brothers. Inspired by the Admonitions of Francis of Assisi, the Sovereign Pontiff calls all people, in particular consecrated persons, to bear witness to true fraternity in their community, to make our communities the place where the Gospel is really lived.

Pope Francis regards this social encyclical as a modest contribution to reflection so that, by confronting the various and present ways of eliminating or ignoring others, we may be enabled to react with a new dream of fraternity and social friendship that is not confined to mere words.

The Pope articulates the wish about all of us together bringing about again a universal desire for humanity. All together: “Here we have a splendid secret that shows us how to dream and to turn our life into a wonderful adventure. No one can face life in isolation… We need a community that supports and helps us, in which we can help one another to keep looking ahead. How important it is to dream together… By ourselves, we risk seeing mirages, things that are not there. Dreams, on the other hand, are built together. Let us dream, then, as a single human family, as fellow travellers sharing the same flesh, as children of the same earth, which is our common home, each of us bringing the richness of his or her beliefs and convictions, each of us with his or her own voice, brothers and sisters all.”

But what do we understand by a religious community?

A religious community is constituted by persons whom God’s call has united and who life in community in a deep interdependence. Comprising celibate persons of the same sex, it is a place of perception, acceptance and realization of oneself and the other. It is a place of development. An ambiance likewise of fraternal love, the main qualities of which are gratuity, universality, and mercy.

A religious community differs from any other kind of material gathering or from being a simple collectivity. In the religious community, human beings live with together, without choosing one another. People who live in a community are not like strangers travelling on the metro, where despite great physical proximity, each is alone, unknown to others and even almost non-existent to them (presence of proximity and no spirit).

In the community, the human person is important (and the Pope speaks of respect for human dignity), because without this one cannot in any case speak of a community.

Community, a place of fraternal love

The love of God for men is essentially gratuitous. “God gives through pure benevolence, without any necessity forcing him to do so, without any obligation inciting him to do so, without any requirement imposed on him on the part of the one who receives.” Gratuity is not accidental to the love of God, but its very essence. Now Jesus asks his disciples to love as the Father loves, to go so far as to lay down their lives for their enemies. This is what the religious set out to live.

There exist in a religious community violent surliness, violent looks, violent estrangements, violent rebuffs, violent words. And this violence, unless countered by forgiveness, breeds violence. We draw our gun in response to whoever fired it. The victory of one violence over another produces destruction and ruins of the community. The unique evangelical way to overcome violence in our communities consists in nonviolence that includes forgiveness.

Community, place of meeting the other different from myself

The other who appears in my universe is not an object, an enemy still less something that I can manipulate, use, possess or even delete as I see fit. Faced with the other who emerges in my universe, what is the anthropological vision or option that fundamentally drives me?

Faced with the other taken for an object, several negative attitudes are possible:

All these negative attitudes do not promote true brotherhood. Because of this, the Pope urgently calls out to us and directs our attention. Brothers who live together must consider themselves “really” as brothers avoiding prejudices, sadism, hatred, meanness, calumnies against their confreres.