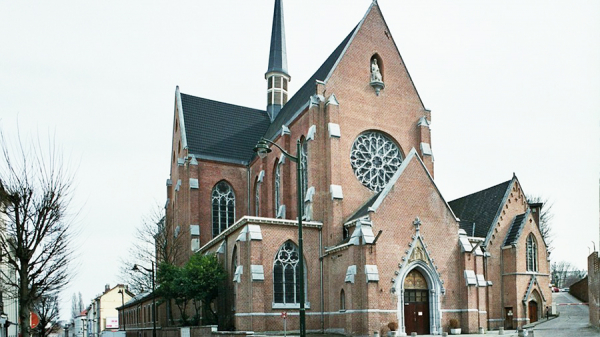 For some time our house at Chaussée de Wavre 201,1050 Brussels, has been completely renovated, ready to receive the Novitiate, according to the decision of the General Council. The building was ready but remained empty. But now there are two novice candidates who had joined the Community of Amsterdam to live a time of postulancy. So this is a great hope for the 'Northern' part of the St Peter-Julian Eymard Province.

In view of this, the General Council had confirmed the purpose of the house and appointed the formators. Thus, on 15 October 2019, two novices began the Novitiate under the guidance of Fathers Hans van Schijndel (Father Master) and Gérard Daix (Socius). These novices are two diocesan priests from the Netherlands, one from Amsterdam and the other from Rotterdam.

"What is it that inspires these two men to enter the Congregation of the Blessed Sacrament Fathers?” - you may be wondering. I want to leave them to respond to this. Here are some sentences from their letters of application.

One of them writes: "The real presence of Christ in the Eucharist and adoration has never left me, his closeness, his gift of self, his love. The Eucharist is central to my entry into the Church. I believe that Our Lord is asking me for a greater commitment in the Eucharistic apostolate, as well as for a more intense life of prayer in a community”.

The other states: "These recent years, I have been more and more attracted by the Rule of Life: 'To live together, pray together, serve together'. Yes, I feel more and more called to participate, as a religious, in the Eucharistic mission of the Congregation. I hope to grow - through Father Eymard’s intercession - as a member of the great Eymardian family and, as a religious, to make my contribution to the Eucharistic mission: a mission for which the Church today and culture are in great need".

You see! The road is still long, but we have every confidence in their competent and inspired accompaniment. They can obviously rely on the assurance of our fraternal prayer.

We entrust them also to yours, and to share in our joy.

Tweet
Published in News
More in this category: « Meeting of the International Commission of Formation Priestly Ordination at Saint Pierre Claver »
back to top