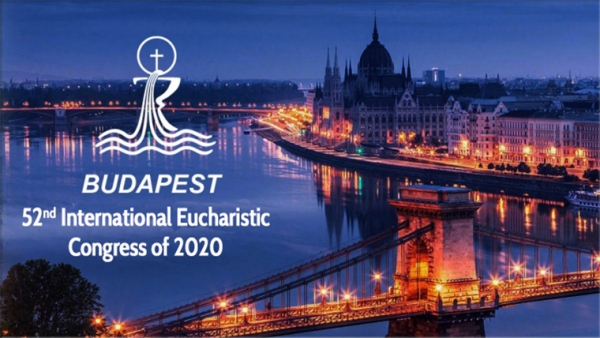 "All My Springs are in You"
The Eucharist: Source of Christian Life and Mission

The International Eucharistic Congresses are one of the great public manifestations of the Church which underline and mark the importance of the Eucharist in the life of Christians, and in ecclesial practice. Originating in 1881 with the purpose of honouring Jesus Christ, truly present in the Eucharist and bearing witness to his infinite love for the world, they have given rise to historical processes of growth in the capacity of Christian communities, to respond to human expectations and to contribute to the building of a more human, just and peaceful world, all having its roots in the celebration of the Eucharist.

Hungary previously hosted a memorable international Eucharistic Congress in 1938 in Budapest. Eighty years later, the event will once again be celebrated in the same place but in circumstances which are historically and socially very different.

Hungary has very deep Christian roots. Its first King, Saint Stephen (1000-1038) led the Hungarian people into the community of Christian nations of Europe. Among the mediaeval royal houses of Europe, the Arpad dynasty gave a significant number of saints to the Catholic Church; but neither do their lack more recent martyrs who have offered their lives for others. The Christian faith, the teaching and example of their ancestors sustained the Hungarian people throughout the storms of history. Today, the old saying remains valid: “our past is our hope; our future is Christ”.

Hungary planned its last International Eucharistic Congress around the motto “Eucharistia, vinculum caritatis”. The world at that time was experiencing great tensions and there was a great desire for peace in the face if a new and seemingly inevitable war. In the Congress hymn the faithful sang: “Reunite in peace, o Lord, each people and nation” and the participation of half a million people in the procession and the concluding mass became a kind of demonstration on the part of the people in favour of peace and against the war that threatened.

None of this succeeded in staving off the second world war which brought great struggle and sacrifice to Hungary. Then, following the war, the Christians were persecuted and crushed by the dictatorial communist regime. The religious orders and congregations were abolished; many priests and lay people were imprisoned or deported to labour camps. The regime, which declared itself to be atheistic, engaged in an on-going campaign of torment and suppression, involving the bringing of Catholic schools, with the exception of eight colleges, and the prohibition of religious practice. All of that resulted in hundreds of thousands of people seeking refuge overseas.

The faith and the Christian values survived by going “underground” and were passed on to more recent generations by vibrant “illegal” communities. In this way, the number of practising Catholics was greatly reduced, while two or three generations grew up without any religious education. This is the root of the widespread religious ignorance, the indifference towards the faith and, sometimes, even of a certain hostility in respect of the Church, all of which are consequences of decades of anticlerical propaganda.

After the liberation and the regime change of 1989, there was a certain renewal in Hungary of religious practice. The return of democracy made it possible to re-open creches, schools, colleges and universities of both Catholic and other religious traditions. Some Christian values began to re-appear in political life and in legislation. Many Churches were re-opened for worship, some new Churches were built and Christian communities of various traditions gained a partial material compensation. While the various forms of consecrated life recommenced their proper activity with renewed vigour, the service of Caritas spread throughout the country and a growing number of lay people now participates in parochial and community life.

In the thirty years since 1989, however, many things have also changed for the worse. As in the other post-communist countries, so also in Hungary the picture of religious life and of faith has been weakened because of secularisation, laicisation, the desire for material well-being, relativism and agnosticism. This has led to an increase in the average age of the faithful and a reduction in the number of those practicing, such that out of ten million Hungarians, only about 7% to 10% of the population participate in the Sunday Mass. The crisis has also affected family life and vocations to the priesthood and religious life, because of the difficulty of evangelising among the youth. The social presence of the Church is also becoming less effective, even though larger numbers of adults are turning to the Christian communities in search of a response to the fundamental questions of life.

The Objectives of the Congress

The preparation for the International Eucharistic Congress of 2020 and its celebration offer to Catholics and to those with whom they are in close connected through cultural heritage and through friendship, an extraordinary opportunity to stand together before society and to bear public witness to their faith. Modern man as Pope Saint Paul VI said: «listens more willingly to witnesses than to teachers, and if he does listen to teachers, it is because they are witnesses ». (PAUL VI, Evangelii Nuntiandi 1975, 41).

The International Eucharistic Congress, therefore, becomes an opportunity for Catholics to strengthen the faith and to share hope, life and joy with those who walk the same path, starting out from the Eucharistic source of the Risen Christ. Through participation in the Eucharist the faith of believers is confirmed, their Christian identity is renewed and their communion with Christ and with their brothers and sisters is deepened. In this way, Christians, in a society dominated by the dictatorship of relativism, can bear witness to the truth before the world with their heads held high, with courageous serenity, and with love and gentleness after the example of Christ.

The International Eucharistic Congress is, furthermore, an opportunity to strengthen dialogue among Christians, with confidence that there are far more things that unite us than those that divide us. Under the guidance of the Holy Spirit, we are drawn to listen and to understand in order to resolve those questions that remain open and to seek, in the truth, our future path together. Only the combined witness of believers can offer to unbelievers the Good News of salvation.

To people of every class and social condition who seek God, the Congress addresses the kerygma, the initial proclamation of the Gospel: God, the source of every life, loves every one of his creatures unconditionally. Because of this, he sent us his only Son, Jesus Christ, made flesh in the womb of the Virgin Mary. With his words and his message, by his Death and resurrection, he has cancelled our sins and, through the action of the Holy Spirit he lives forever in his Church. Whoever freely decides to turn his back on evil and to accept Christ as Saviour, enters through Baptism into that great family of the redeemed and builds up the great community of the children of God.

On the global scale, in the Eucharistic Congress, we give thanks to Christ and we glorify him, the only one who is able to offer life. And we pray that the joy which flows from the Eucharistic source will spread out not only throughout Hungary, but also in the countries of middle Europe, throughout the whole of Europe and the whole world. In this way, we can all find a moment of spiritual renewal, an evangelical reorientation, a crumb of faith which will overcome uncertainty, a light of hope for those who are sad, and a little love to triumph over solitude and isolation.

Last modified on Wednesday, 20 February 2019 11:45
Tweet
Published in News
More in this category: « “La Mure” Project Professions of Perpetual Vows and Ordinations in Uganda »
back to top