Updates on Relevance and Challenges of P.O.L.A. Eucharistic Apostolates 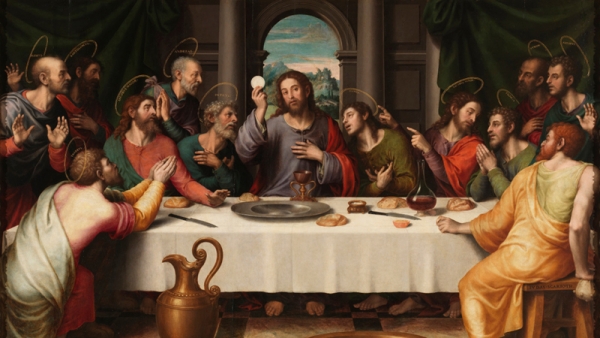 The Holy Eucharist is "the source and summit of the Christian life" (Lumen Gentium, no. 11; cf. Catechism of the Catholic Church, no. 1324). And the essence of Christian life is Christian spirituality, which is one’s way of life reflecting the Gospel However, amidst the secularism, modernism, and globalization pervading in our society, it is relevant to assess where the Eucharist stands in terms of its centrality in the life of the baptized today. Based on the current reflection of our parishes and communities, on a scale of 1 to 5, where 1 is of little importance and 5 is indispensable (central), the rate would be 3 (important). There is a wide range of reasons for this result, foremost of which is the predominantly Catholic orientation of Filipinos. We can testify that the faithful are thirsting for the presence of Jesus in their lives, and their participation in the Eucharistic celebrations to a great extent fulfills their longing for the Divine who can accompany or journey with them especially during their experiences of trials and difficulties. On the other hand, there is still a challenge on the part of the parents to instill in the hearts of their children the importance of religion or, at least, encourage them to attend the Mass regularly especially during Sundays and Holy Days of obligation. The basic instruction about the importance of the Eucharist should emanate from the parents, and they should set a good example for their children to emulate. On the part of the ministers, our Sacramentino priests and religious, we are doing every effort to inject our reflection on the Eucharist every time there is an opportunity, particularly in homilies, talks and conferences, retreats and recollections. And we believe it helps nourish or deepen the people’s understanding of the Eucharist. Obviously, we also acknowledge the fact that we need to strengthen our Eucharistic witnessing and be more aware of the impact of our actions more than the words that we utter in preaching. 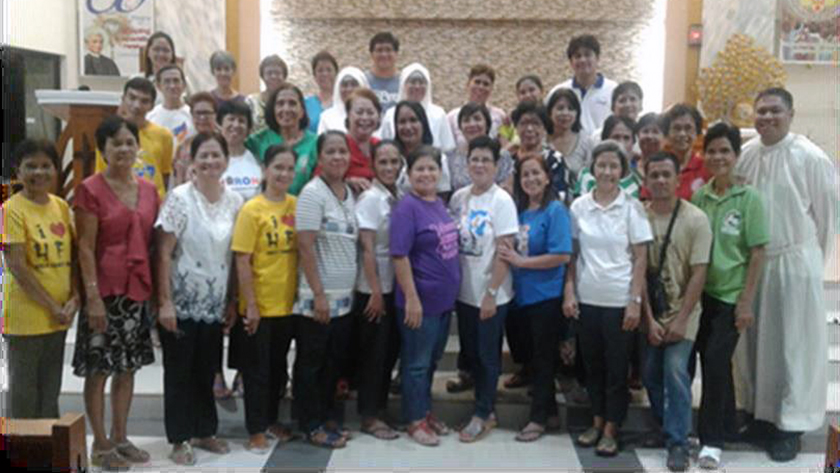 September 14, 2017. The Aggregation of the Blessed Sacrament was launched at Holy Family Parish, Panal, Tabaco, Albay. There were 50 parishioners who signified their interest by filling out the Registration Form. This October 27, the First Module, What is the Mass and Introductory Rites, was discussed with them. 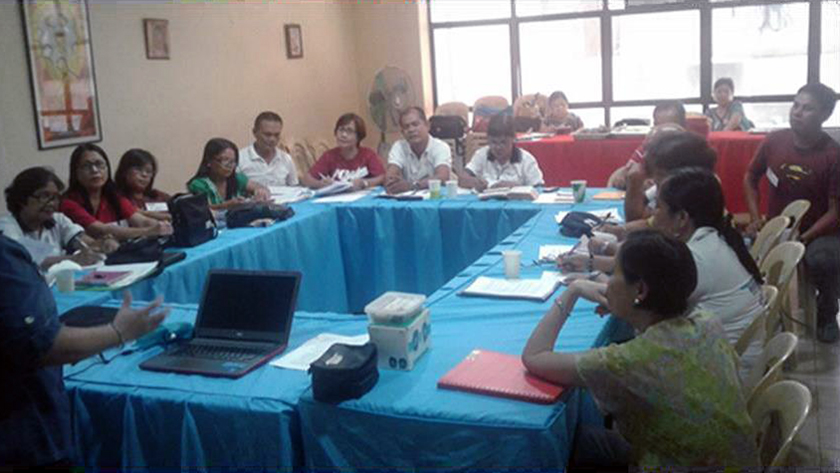 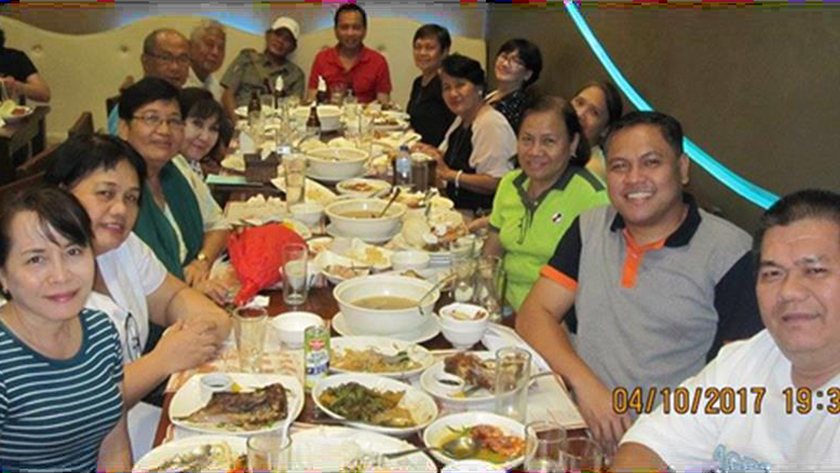 October 2 and 4, 2017. LITES CDO met for updating about the input Eucharist: Summit and Center of Christian Life and Discovering the Eucharist, according to Ritual Approach by Jean-Yves Garnaeu, SSS. A meeting was also held chiefly about LITES’ 25th Anniversary and the First National Gathering of SSS Eucharistic Collaborators. On the last day, there was a simple agape for the birthday celebrators for the month of October. 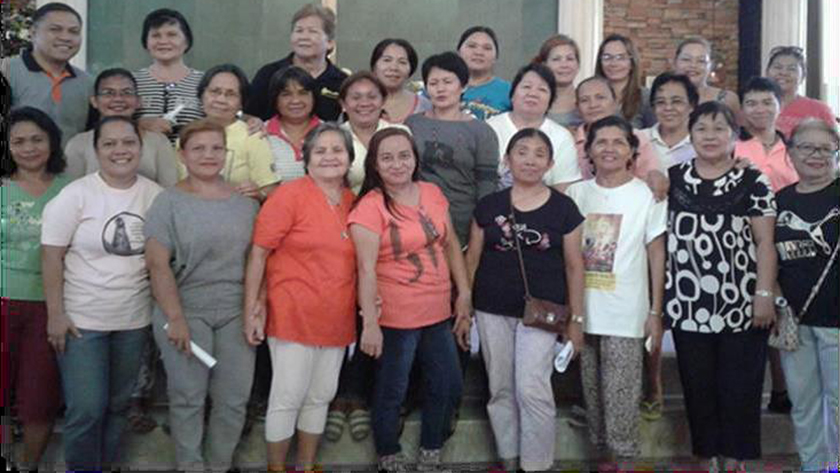 October 4, 2017. The Aggregation of the Blessed Sacrament was introduced to the 25 active adorers of Nuestra Señora Virgen Del Rosario Parish in La Consolacion. These adorers are also volunteer catechists of the parish. The next modules will be given by Br. Alvin Manawis, who is assigned in Cagayan de Oro community as seminarian on pastoral exposure.

October 14, 2017. The Fifth Module: The Liturgy of the Eucharist, Part I, of ABS Formation was given to the candidates of the Servants of the Blessed Sacrament Sisters, Zabarte, Quezon City.

October 21–22, 2017. LITES was held at the 4th Floor of the Parish Pastoral Center of Sto. Niño de Taguig Parish, Taguig City. The attendees were the 70 active volunteers of San Vicente Ferrer Parish. The seminar was led by the members of LITES Manila, together with the new members of LITES Taguig. 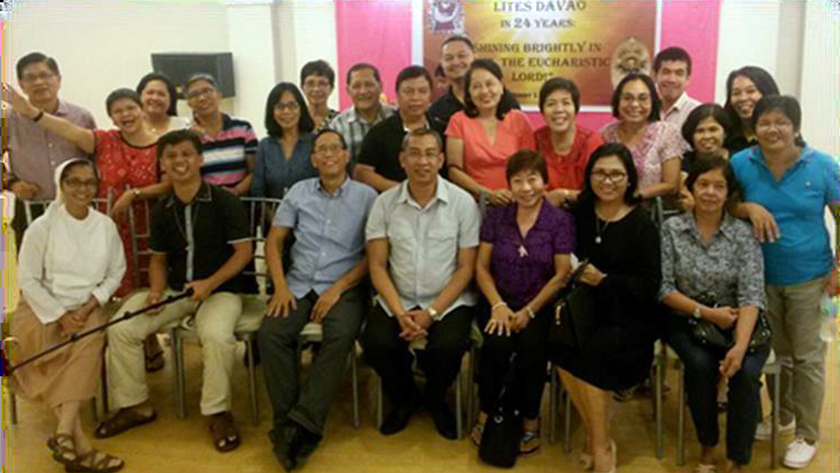 October 3, 2017.  LITES Davao celebrated its 24th Anniversary at Yummy’s Resto, F. Torres, Davao City. The sumptuous dinner was paired with a short program prepared for the said event. As part of the celebration, a Rummage Sale was also held on October 8, 2017, at the grounds of Our Lady of the Assumption Parish.

October 6, 2017. The animation of the postulants of Batch 2017-2018 in a two-hour session was more of personal sharing regarding vocation, the importance of Sacramentino witnessing through Adoration before the Blessed Sacrament and the Eucharist as the charism and the heart of the Congregation.

October 6, 2017. The Sixth Module: The Liturgy of the Eucharist, Part II, of ABS Formation was given to the candidates of the SSS Davao Community.

October 8, 2017. There was animation of the People’s Eucharistic League of Our Lady of the Assumption Parish, Davao City. There was also a short talk about Mary: The Faithful and the First Disciple of Jesus. 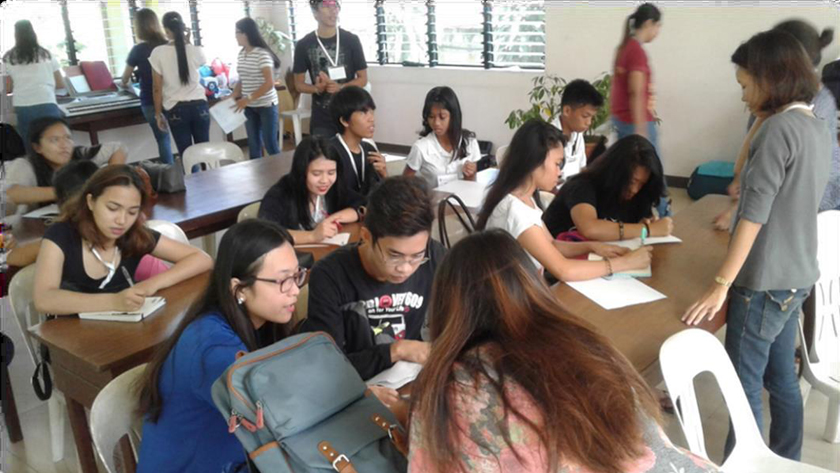 November 4-5, 2017. The Eucharistic Youth Movement (EYM) gave the Basic Orientation on Eucharist for the Youth (BOEY) to the youth of Our Lady of the Assumption Parish, Davao City. There were 24 participants coming from the different organizations of the parish who attended the said activity. It was held in Balay Pasalamat at the Retreat House of the MIC Sisters, F. Torres, Davao City. The BOEY consists of the following modules: (1) God’s Love on Salvation History, (2) Journeying with Jesus, (3) Eucharist as Celebration and Memorial, (4) Parts of the Mass and (5) Missioning. The participants enjoyed the many formative activities, life-sharing and other group dynamics relevant to each module. The event began with the celebration of the Eucharist and was ended in the same manner. The facilitators were from the Core Group of EYM: Aubrey Joy “Bhojoy” Villegas, Imeelyn Krystelle “Kring-Kring” Cordero, Niza “Niza” Ann Alcoy, Weillyn “Ikay” Marapao, Patreza “Pat-Pat” Masanegra, Rogelio “Ogie” Dajao II, Ludelyn “Thalyn” Carillo and Jerald “Jerald” Salvaleon. Mrs. Rhizza “Ai” Mutya serves as the Group Animator.

Last modified on Friday, 10 November 2017 16:13
Tweet
Published in Archives
More in this category: « Middle Religious Gathering Celebrating 20 Years at the Eucharistic Banquet »
back to top