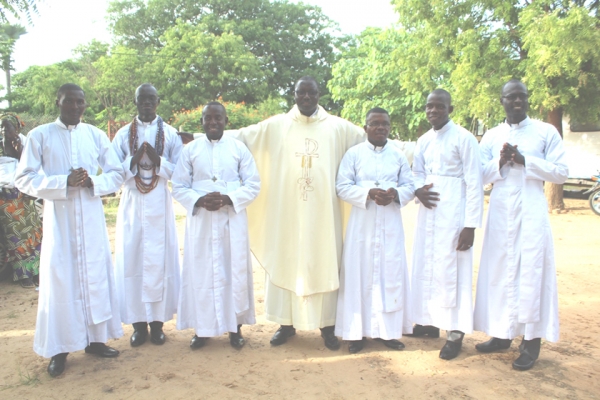 As is customary on each September 8 throughout the Congregation of the Blessed Sacrament, on Friday 8 September 2017, the Feast of the Nativity of the Virgin Mary, six young novices who completed their formation made their first religious vows in the parish of Saint Peter-Julian Eymard at Koudiadiène. Two other brothers on this same occasion renewed their temporary vows.

This took place during a Eucharistic celebration beginning at 4 p.m., presided by Father Edgard Diémé, the Superior of the new province of Our Lady of Africa in Senegal. The following brothers officially committed themselves to the Congregation of the Blessed Sacrament: Alfred Frays Kumanzembe from the Dem. Rep. of Congo, Ange Mayithé Miayoukou, Céti-Césaire Bansimba Moukanza, Ephège Baloula from Congo Brazzaville, Christophe Mendy and Francisco Mendy from Senegal. Their promises were made before the religious, relatives, friends and acquaintances who had come to support them to live the vows of poverty, chastity and obedience.

In his homily Father Edgard spoke of the importance of the commitment undertaken by the newly professed and advised them to “allow themselves to be seduced by the poor, chaste and obedient Master of Nazareth”, because through him, if they follow these counsels, they will discover happiness. He put this in these words: “And this choice, if you undertake it truly with all your heart, will be the source of joy, peace, in a word, gladness”. Continuing his homily, the Superior of the new province of Our Lady of Africa in Senegal invited the new religious in their commitment to follow Christ in the overcoming of self to be inspired by God’s love manifest in the Eucharist, to take Christ as their sole reference point, to love him and base their whole life on him. However, he clearly pointed out that in the course of their journey, they will experience a life consisting of daily infidelities and mistakes; but these very things should not put them off track if they learn to accept them and carry their cross. This cross consists of small and great miseries, sufferings. They must thus live the truth in fully taking up their suffering. Father Edgard Diémé thus ended his homily by inviting the brothers to abandon themselves entirely to God and to allow themselves to be guided by his Mother, the holy Virgin Mary.

After the homily there followed the rite of profession and clothing with the habit, consigning of the Rule of Life and cross. Brothers Abraham Correa and Paul Ndour likewise in the course of this same Eucharistic celebration renewed their temporary vows. Then the Mass continued as usual. At the end of the Eucharistic celebration Brother Alfred Kumanzembe on behalf of the newly professed gave thanks to God for the gift of the Eucharistic vocation. They likewise thanked the Congregation of the Blessed Sacrament for accepting them as its members and also thanked those who had come to support them.

After the Mass the relatives, friends and numerous acquaintances present congratulated the newly professed, offering them gifts and in a fraternal and convivial spirit shared refreshments in the grounds of the parish presbytery.