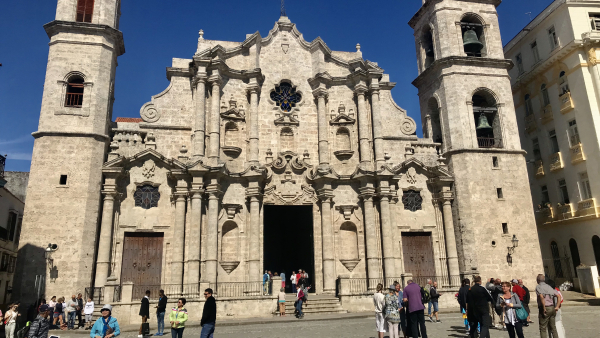 "Havana lacks a History (...) the oldest ones invent another story, a lie, as it should be (...) between Havana-that-does-not-exist and Havana-a-paradise-lost."

The revolution underway, we gladly went at night, after dinner, to the terrace of the chapel to refresh ourselves a bit and speak about the events of the revolution. What was happening began to acquire special interest and concern because of the marked communist turn that the revolution was taking, especially after the failed attempt to invade the Bay of Pigs. Father Martín Gorostidi was in charge of informing the meetings with the news, not without the spark that he used to convey from Jesús de Miramar and that he shared with the Capuchin Fathers. Soon Father Manuel Oyarbide left Havana and went to Sainz de Baranda, Madrid (1961).

Military personnel in the house: this happened one day, when at midnight, that a band of militiamen banged hard on the door of the house. I woke up and, not without fear, went out to meet them. I was not exempt from being discreetly searched and was asked about the persons who were at home that night. With a great deal of serenity. I told them that at the time there were two other religious resting. They ordered them to leave their rooms and locked the three of us in one, threatening to shoot us if we tried to escape. The three of us were: Father Gorostidi, Brother Vicente Urquía and the undersigned, Father Gregorio. That day, Father Segundo Urquía and Father Ignacio María Eguibar were detained in their respective chaplaincies. Because of this they were not at home that night.

While the three of us religious were being held in a room, the soldiers searched the house as they pleased and even entered the Chapel alone. They even opened the door of the tabernacle, with the idea they could find something that could compromise us – such as weapons. When they did not find anything that would compromise us, they free us to be inside the house and the Church, although under their supervision. Of course, they treated us with trust and respect. They allowed us to open the Church for the faithful to be able to participate in the Eucharist and they permitted us to use the kitchen and the table quite freely. In other words, the military personnel did not hinder us from carrying on our normal community life. A few days later, the two fathers who were absent returned to the community: Father Segundo Urquía and Father Ignacio María Eguibar. They chose to leave Cuba.

Last modified on Friday, 24 December 2021 10:10
Tweet
Published in News
More in this category: « Ordination to Deaconate and Priesthood in the Province of Vietnamese Martyrs Jubilee festivity of Fr. Walter Marzari SSS »
back to top