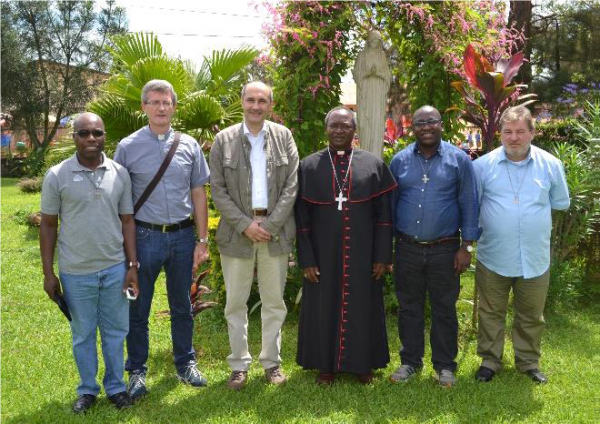 “On 13 May 2020, the feast of Our Lady of the Blessed Sacrament and the anniversary of the foundation of our Congregation, your Province will end its missionary presence in the African continent, where it has been present for 62 years. The courage, availability and missionary zeal have impelled various generations of the Province to express our ideal in their daily life: ‘to live the mystery of the Eucharist fully and to make known its meaning, so that Christ’s reign may come and the glory of God be revealed to the world’ (RL 1)”. By these words Father General, on behalf of the General Council and the whole Congregation, paid tribute to Father Domenico Avogadro, the Provincial Superior and religious of the Province of Our Lady of the Blessed Sacrament, for all the dedicated work carried out in the SSS mission and in the three countries of the great African continent, which is now reaping many fine fruits. The charismatic legacy handed on by the unselfish missionaries of the Province is noteworthy, and they have left two Provinces (that of Blessed Isidore Bakanja - Dem. Rep. of Congo and Our Lady of Africa - Senegal) and a foundation (Cameroons), which is now transferred to the Region of Cardinal Emile Biayenda.

In the decree of transferring the houses of Ndoumbi and Yaounde (Cameroons) from the Province of Our Lady of the Blessed Sacrament to the Region of Cardinal Emile Biayenda, the official date of transfer of the houses was 13 May 2020, the liturgical feast of Our Lady of the Blessed Sacrament. It had been foreseen that significant moment would be during the meeting of Amplified General Council in the presence of all the Provincial and Regional Superiors at the General Curia (5-22 May 2020), but unfortunately, because of the coronavirus pandemic, that historic event could not be realised in the presence of the participants of the AGC, but certainly it had a significant importance for all of us, in particular for those directly involved.

“It is to your advantage that I go away, for if I do not go away, the Counsellor will not come to you, but if I go, I will send him to you.” (Jn 16:7) These words of Jesus at the Last Supper, first his Passion and then return to the Father, can be applied to this situation.

The time has come for the Africans to stand up by themselves. As Father Domenico wrote: “Our Blessed Sacrament brothers who are growing in numbers have at the same time to believe in their capacity to assume for themselves the commitment to proclaim the Eucharistic mystery to their people.”

It is time for the Africans to stand up by themselves. For, “to stand up by themselves” does not mean to be abandoned or to lack presence and support, but as at Jesus’ departure, a new form of relationship is created that is beyond physical presence and material support. Departure can prompt us to think no longer about oneself, but for others and together with others.

“If the experience of our direct involvement in the missions is ending - Fr Domenico, the Provincial, said - however, I don’t wish less attention to be paid to the missionary dimension that I consider to be essential to our Eucharistic vocation.” Rather, a new phase is opened insofar as the Region of Cardinal Emile Biayenda is fortified by strength, prowess and creativity, in order to become a Province in the near future.

Last modified on Tuesday, 21 July 2020 10:40
Tweet
Published in News
More in this category: « A Lent and Easter marked by suffering and death COVID-19 did not stop our SPIRIT as SSS! »
back to top