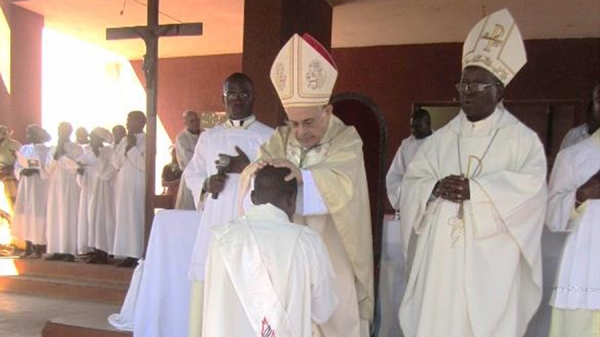 The SSS community of Maputo, in Mozambique, has just had the great joy of the ordination of a confrere, Father Silvério Ernesto, on 6 August 2017 in the diocese of Gurúè, in the north of the province of Zambézia, more than 2500 kilometres from Maputo. 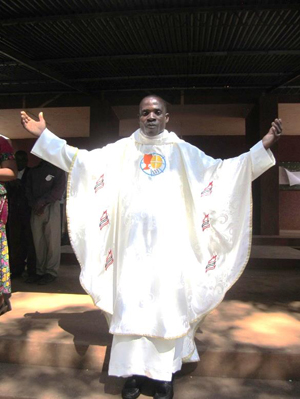 The diocese of Gurúè is one of the last dioceses set up in Mozambique and it is preparing to celebrate its 25th jubilee. However, this diocese and the whole northern region of the country provide most of the vocations in our house of formation, that is, the foyer St Peter-Julian Eymard. For more than fifteen years, numerous youth have come to test their vocation without persevering.

Father Silvério Ernesto is the first to have persevered throughout the course. We hope that this will encourage others coming from this region and elsewhere to persevere in their response to the Lord’s call. For there are still too many people who do not know Jesus Christ and his message of salvation.

The bishop of the place, Monsignor Francisco Lerma, mc, said among other things that the diocese was glad to see one of its members set out for the mission ad gentes. But he also took the occasion to invite the Congregation to be open to setting up a community in his diocese. In spite of the numerous diocesan and religious vocations, the diocese has only two male and six female congregations. There are parishes that are not served in a diocese that according to the statistics contains the greatest number of Catholics in Mozambique.

The Eucharistic celebration was truly thronged by numerous faithful, priests and sisters. The former bishop, Monsignor Manuel Chuanguira, who authorized the then young Silvério Ernesto to come to the Foyer Saint Peter-Julian Eymard, was also present. The Eymardian family was represented by a delegation of three scholastics and two priests, apart from the Vaz family from the parish of Sante Anne de Munhuana.

On behalf of the SSS Maputo community we would like to say a big ‘thank you’ to the Good Lord, the Congregation, the Provincial and his Council, the various formators and all those who spared no effort in forming our colleague, Father Silvério Ernesto. May God bless you!

Last modified on Friday, 15 September 2017 09:06
Tweet
Published in Archives
More in this category: « Eymardian Scholastics and Sisters Gather in Vietnam Father Eymard at La Seyne-sur-Mer »
back to top