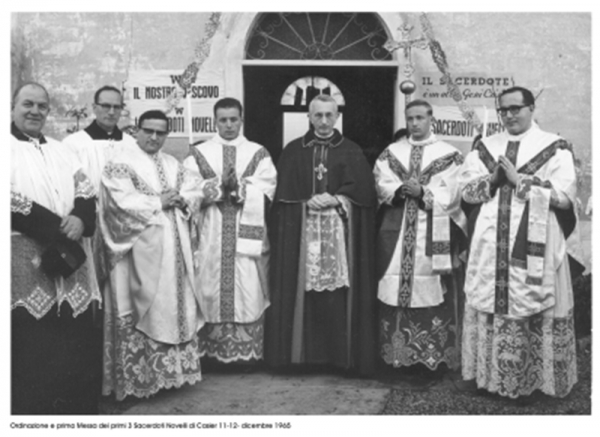 After 67 years of presence in the diocese of Treviso, the Blessed Sacrament Fathers are leaving the parishes of Cendon (together with the small church and area of Nerbon) and Sant’Elena, where they arrived in 2001 from Casier, a town that from as long ago as 1951 hosted the religious community and their minor seminary.

The vocational crisis and the unavoidable aging process of the religious have moved the Blessed Sacrament Fathers to take this decision. There are many feelings in the heart and in the mind. These last  67 years of presence in Treviso have been full of life, commitment, formative and pastoral service; full of creating relationships and contacts with so many people, priests, bishops, families, youth, and seminarians.

The predominant feeling at this moment is that of gratitude, of “thanksgiving”, a deep and sincere emotion that we need to express with all our strength.

Thanks to God for calling us to this Venetian land, precisely to Casier, to live and witness the spirituality that springs from the Eucharist, Sacrament of the Passover of Jesus who transforms the people of being believers and helps them to become the living Body of Christ in history.

After their arrival to Casier, on 29 March 1951, the first Blessed Sacrament Fathers began immediately to create a seminary by arranging the premises of an ex-orphanage, set up by the Toso counts from Venice and that was transformed, during the two Wars, into a hospital.

From the beginning of life in the seminary and until its closure (at the end of the 20th century), the seminarians who attended it were, in total, 450, of whom 38 became priests and 2 lay brothers. The large area of the minor seminary hosted also, from 1971 to 1989, the Novitiate of the Blessed Sacrament Fathers.

The Fathers’ presence in the diocese was not limited only to the pastoral work of vocations and the education of the seminarians, but also involved pastoral work for the service of the Diocese, the parishes and the different groups of Christian spirituality.

Thanks be to God, then, for all the good that was received from this Church of Treviso and for everything that, despite many limitations, were able to be given.

Thanks to the People

We feel a duty, or better, the desire to say THANK YOU, sincerely, to all the people whom we met in these 67 years: bishops, priests, consecrated people, men, women, youth, children… Thank you because we tried to give everything from ourselves to this land and this Church, but we have also received an immensity of gifts from everyone. We tried to be “present”, without any claims but with the desire of being “servants” of our Lord and of the history made by concrete men and women. We are sorry if, because of our weakness, we were not always able to live up to this ideal fully.

To depart … is not to die

In this month of September 2018, hence, the presence of us, the Blessed Sacrament Fathers, in this Venetian land and in this Diocese comes to an end.

It is always difficult to leave, to depart. It is with regret that we depart from this “sacred land”. But our faith, and particularly the Eucharist, assures us that we are part of Jesus’ Pasch, Jesus who conquered death and opened the way towards Life.

In this spirit we say goodbye to the whole Diocese of Treviso, knowing that the “seeds of life” that, by the grace of God, we were able to plant, will sprout according to God’s time. For us, it is enough to know that, in his name, we planted in abundance. Now it will be he who will make the seeds grow and will give someone else the task of gathering up the fruits.

We ask every one of you to remember us in your prayers and to continue to remain in that love, in that spiritual and fraternal union that we call an experience of life in the Body of Christ – namely the Church – that no distance can erase.

Last modified on Monday, 10 September 2018 09:55
Tweet
Published in News
More in this category: « New stained-glass windows in the Eymard Chapel Eurocamp 2018. “Exaggerated love” »
back to top