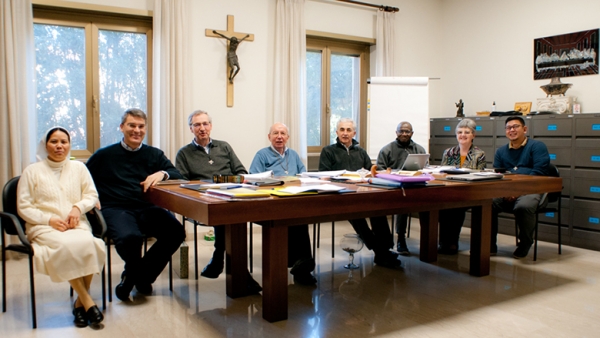 The meeting of the CEFO took place at the General House in Rome on 12-14 November 2018. The Commission welcomed the presence of new members. Firstly, Father José Antonio Rivera Ruiz, a General Consultor who replaced Father Martin Tine, who is now a bishop; and also, Sister Maria Vu Thé Hue, the Assistant General of the Servants of the Blessed Sacrament. Mrs Anne Marie Françoise Ndoye from Senegal could not be present. Insofar as it was possible the Superior General took part at times in our work.

A reading of the Minutes of the meeting in November 2017 helped us to consider the work done so far and the next step. The main theme of this meeting focused on the liturgical year. The objective was to refer to texts based above all on Father Eymard’s preaching during the important seasons, such as Advent, Christmas and Epiphany, Lent, Holy Week and Easter, Ascension and Pentecost, but also regarding the principal feast of Our Lord, the Virgin Mary, St Joseph, the angels, apostles, martyrs, etc.

In the course of the last year, as had been agreed at the last meeting, each one had endeavoured to find in the “Complete Works” those texts that he/she wished to present regarding a liturgical season or feast. We were surprised to find that we had before us an important volume of text. We raised the question: what method should be adopted so that Father Eymard’s vision of the liturgical year and feasts of the saints could be useful to SSS religious and laity. Following a long discussion, in which all were able to express their opinions, we decided upon two lines of approach: to select complete texts, which should be written (not notes), and to keep in mind always the usefulness for today; to consider producing two books – one, concerning the liturgical year (the highlights) and the other about the Sanctoral (the main feasts of the Virgin Mary and saints).

We divided into three small working groups, focusing first on one section at a time, each group making a selection of texts and presenting it to the whole Commission by offering suggestions and giving the reasons for these. We were aware that the texts would always require an introduction to show their context to specify what does not pertain to our sensitivity today. In accord with this approach, during the remaining days the CEFO worked on the following sections: Advent, Christmas and Epiphany, Ascension and Pentecost. After reading and sharing in small groups, we gathered to pool our findings and to select texts about which there was a consensus of the majority of the Commission.

One topic kept recurring several times during our meeting: how to encourage spreading the work of the CEFO. Today formators have available material that can assist them, for example, the “Counsels of the spiritual life” that can be found on the website of the General Curia in four languages. Perhaps it would be necessary for the animators of lay groups to be helped by making suggestions. There remains the matter of translations. The General Council’s concerns are mainly regarding First and Ongoing Formation.

The CEFO invites the General Council to draw attention to the site of the General Curia in the Reserved Area set out in various languages. It will be necessary to point this out to Provincial Superiors, Formators, animators of groups of the Aggregation. Take advantage of trips to inform, communicate. It would be necessary to have the material made available through the commissions of the Provinces, that of formation, that of the laity. There remain problems related to culture, since in some of these there is no inclination to read.

The next meeting of the CEFO is set for 11-13 November 2019, The venue for this has to be decided between Rome or Paris.

Tweet
Published in News
More in this category: « Sri Lanka is gifted with two more Religious Eucharistic day Reunion of Charismatic Eymardian Family »
back to top