Arrival of Filipino Priests in Spain 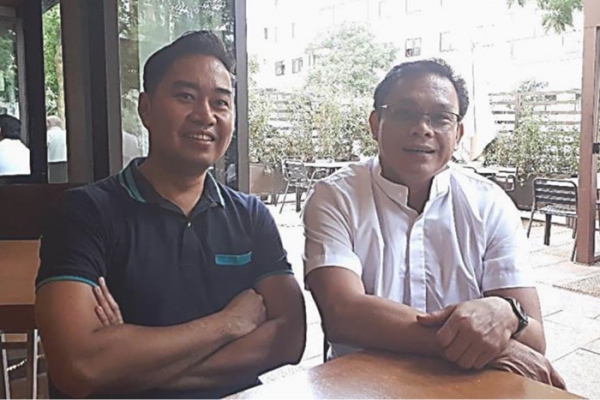 On last 27 July, we welcomed Fathers Dante and Allen. The collaboration in agreement between our Delegation and the Province of the Philippines (Our Lady of the Assumption) was thus concretised. This all began when last year at Chicago, during the General Chapter, the Father Provincial, Joseph Matitu, offered us his help, given our precarious situation regarding confreres: it was a sign of gratitude to the Spanish Blessed Sacrament religious José Agustin Odriozola and Martin Garmendia, who about 50 years ago left as missionaries for those lands and on the occasion of the Vth centenary of evangelisation by Spanish missionaries.

Since the General Chapter unto today there have been various letters exchanged and occasional telephone calls between the then-provincial Delegate, Father José Antonio Rivera, and Father Joseph Matitu, to clarify in a detailed way the agreement of collaboration outlined at the last Provincial Chapter, with the approval of international collaboration, and, finally, with the signing of the convention between the Provinces, the signing by the two Provincial Superiors and the confirmation by the Superior General.

The first objective, the most immediate, for Fathers Dante and Allen is to consolidate their knowledge of the Spanish language. For this, therefore, every morning from Monday to Friday they receive Spanish lessons for foreigners at an accredited centre, which is close to our community of Madrid-Sáinz de Baranda, where they reside at present and also have the opportunity to get to know our situation and culture. The second objective, less immediate, is to start undertaking tasks and activities both in the community and in the parish: animation of the liturgy, accompaniment of groups, etc. Fathers Dante and Allen have been with us for a few days, but we have already had the joy of meeting them and we wish to share with you some of their experiences and expectations that they have related to us.

Father Dante, Dante Mejillano, was ordained a priest in 2003. He was a formator for many years and has accompanied groups of married couples and families. He has experience abroad, having worked in Uganda and Australia. He would like to foster the liturgy, to teach and work with children, youth and families. He plays the guitar, an instrument that brings joy and enlivenment during meetings. He thinks that participation in the parish should be encouraged and work based on the needs required by the community.

Father Allen, Allen Peña, was ordained a priest in 2011. Since then his pastoral activity has been concentrated on formation and on parochial financial matters. Before beginning his preparation to become a priest, he worked as a university professor of philosophy. In 2008, while preparing for priestly ordination, he worked in Argentina in our community of Buenos Aires. He plays the organ, has an artistic spirit, loves to teach and cook and would like as soon as possible to be involved in parish activity.

They are both eager to improve their level of Spanish and to be able to share in the parish activity. At one with the missionary message of Pope France, they express their gratitude to the Congregation’s fostering it by internationalisation. We also support their insertion into the pastoral and community life in our community of Sáinz de Baranda.

Initially, the agreement is for two years ‘ad experimentum’. We hope that the experience that they will have in a way of living in our country may be pleasant, even if at first it would be difficult since they have been used to seeing many faithful attending church and also because of the distance from their country and their family.

Tweet
Published in News
More in this category: « A New General Consultor is Elected Return to the Inter-African Scholasticate “Emmaus” »
back to top