Ministry of Acolyte and Lector 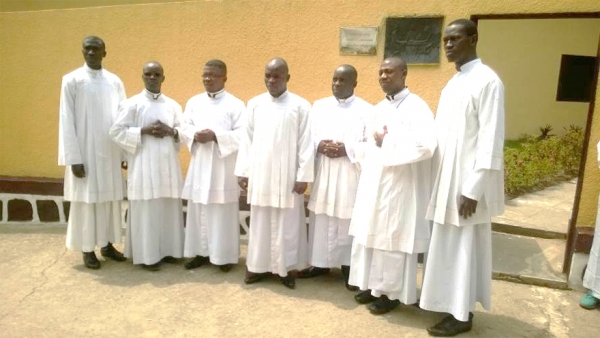 On 6 May 2018 the celebration of conferring the ministries of acolyte and lector on seven scholastics was held in the parish of Blessed Anuarite of Kinshasa. Father Eugenio Barbosa Martins, the Superior General of our Blessed Sacrament Family, presided at this celebration; he was accompanied by Fathers Martin Tine, the Vicar General who is also responsible for formation, and Anaclet Bambala, the Superior of the Province of Isidore Bakanja, Denis Ndene, the Rector of the Inter-African Scholasticate “Emmaus”, and other SSS religious, without forgetting to mention also the participation of parishioners, seminarians, friends and acquaintances, who were present to encourage and give thanks to God for this new step being taken by the confreres in the service of the Church.

The French choir of the parish opened the celebration. In his exhortation, the Superior General invited the assembly to live the experience of Easter through love, by assimilating Christ’s resurrection with “an energy that impels us to go forward.”

He explained also the functions of these ministries that can be carried out during and after the liturgy. He pointed out that in the Church ministries are received in view of “service.”

Just after the homily, the Father Rector called the candidates out by name. It was very beautiful to see the procession of the seven young scholastics vested in white cassocks and surplices, their hands joined before their hearts – a pious posture that shows humility and an attitude of listening. After the Thanksgiving, the parish priest expressed gratitude to the whole assembly for their participation.

In leaving the church, the ‘graduates’ of the day were congratulated, followed by a meal offered by the community took place for the SSS religious as a sign of brotherhood and solidarity.

Tweet
Published in News
More in this category: « Provincial Chapter of the SSS Province of Vietnamese Martyrs Eurocamp 2018 »
back to top