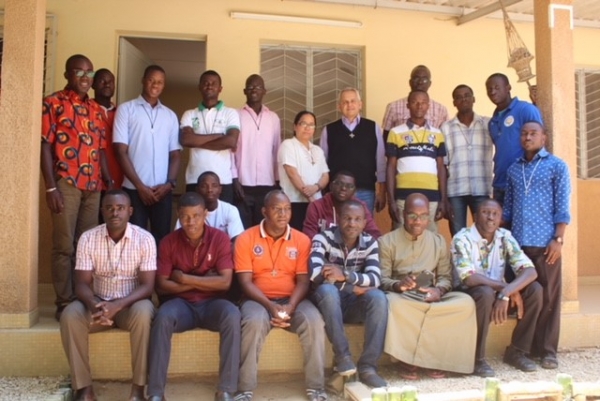 From Tuesday, 17 April, to Sunday, 22 April 2018, the novices of the Inter-African Novitiate “The Cenacle” at Koudiadiène had the joy of welcoming to their community Fathers Eugênio Barbosa Martins and Martin Tine, respectively the Superior General and Vicar General of the Congregation of the Blessed Sacrament.

This visit to the novices was realized on the occasion these persons responsible for the Congregation being present in Senegal for the celebration of the 1st Provincial Chapter of the Province of Our Lady of Africa.

In the course of their visit to the novices these Fathers dealt with many themes. Father Martin spoke to them about the final message of the 35th General Chapter.

The Superior General’s presence in the novitiate was the occasion for the novices and their formators to converse with him first of all as a community then individually. Father Eugênio with great kindness, availability, and simplicity was thus able to share with them his approach to the challenges of the Congregation, the Founder, community life, the family, the vows and the financial difficulties of the Congregation.

The novices found these conversations very fruitful and enriching. For their part, the Fathers appreciated very much this sharing, which they found was carried out in a very fraternal spirit.

At the end of their visit, the novices expressed their gratitude to the Superior General and the Vicar General for their visit and wished them all the best in continuing their mission of government of the Congregation.

On behalf of both Fathers, on the other hand, the Superior General offered the Fathers much advice and wished them a lot of courage to fulfill their formation.

Last modified on Wednesday, 09 May 2018 21:55
Tweet
Published in News
More in this category: « Parish of Blessed Anuarite: Adoration animated by the SSS Scholastics Archbishop Marie-Dominique-Auguste Sibour »
back to top