Visit of the General Council to the “Emmaus” Scholasticate in Kinshasa 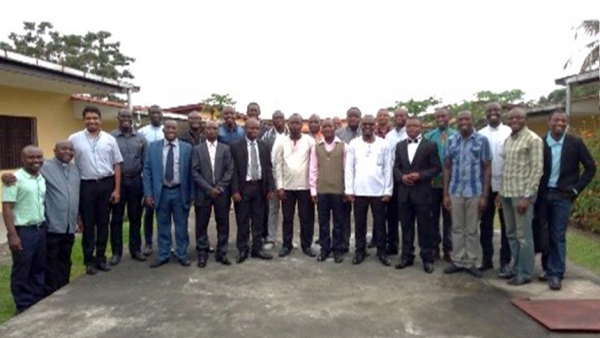 After the meetings of the third regional Chapter of Congo Brazzaville, held from 7 to 11 February 2018, Fathers Martin Tine, Philip Benzy and Brel Maloula, the Vicar General, General Treasurer and new Superior re-elected by the Region Cardinal Émile Biayenda respectively, arrived in the territory of the Province Blessed Isidore Bakanja in the Dem. Rep. Congo on Monday 12 February 2018. Their stay ended on the morning of Saturday 17 February 2018. Their trip, in fact, had a dual purpose.

First, the visit of the Interafrican “Emmaus” Scholasticate: the Fathers began at the Scholasticate before undertaking their visit to the other communities. On the evening of Monday the 12th these persons devoted some time to a fraternal conversation with us. Thus, in addressing us Father Martin communicated Father General’s greetings and above all many encouraging words to the houses of formation and the scholasticate in particular. This stage is the time of integrating spiritual values, intellectual or professional activities and pastoral commitments as the Rule of Life indicates in n. 58 §2.

Then, Father Philip Benzy, the General Treasurer of the Congregation, praised the community life of the scholastics of Kinshasa, comprising 5 different nationalities. This shows clearly our unity in diversity, in accord with our Rule of Life n.8: “A community is made up of persons who differ in their capabilities, duties and circumstances. This diversity manifests the wealth of the gifts of the one Spirit.”

Father Benzy, a specialist in the financial affairs of the Congregation, also put before us some of the difficulties our family is going through at present, but he is hopeful that these will be overcome soon if we are bonded together by living in the Eucharistic spirit.

Father Brel, the Superior of the Region of Cardinal Émile Biayenda and Vice-President of the African Conference, urged everyone to live in brotherhood for a better future, to reflect about the issue of internationality, an idea emphasized at the 35th General Chapter. Finally, Father Denis N’Dene, the superior of the scholasticate community, raised some questions for clarification, to which Father Benzy responded precisely and lucidly.

After their visit what is there to say regarding the future of the Scholasticate?

In reflecting about the state of the Congregation and after the Superior General’s letter on the financial state of the Congregation, some of us, like the disciples of Emmaus, lost even a sense of faith because our fear being engulfed by the financial crisis. But after Father Benzy’s detailed explanation, we found assurance in that we have something to offer one another: the Eucharist. If we live in the spirit of the Eucharist the crisis will not cross our threshold. So, our intellectual theological climate, relying on philosophical understanding and wisdom, links us directly to the word of God, who is the Teacher of all, in whom we will find solutions to overcome the various difficulties that threaten us. And the essential end of the Scholasticate “Emmaus” consists in enlivening an effectively apostolic life as scholastics to become already initiated, in the light of the principles of this theological and philosophical wisdom, to face the serious problems that today are impinging on our Eymardian family.