Eucharistic Fire on the Four Corners of the World 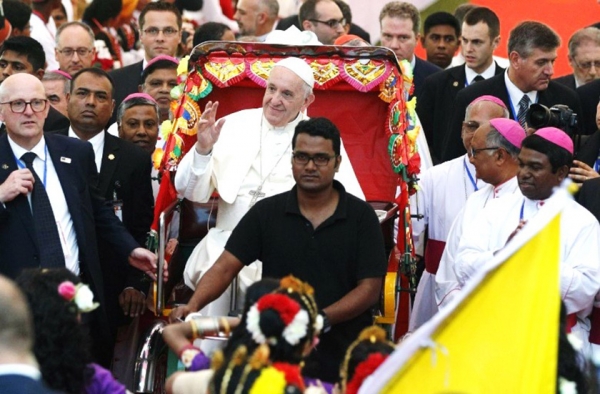 At the request of Cardinal Patrick D’Rosario of the Archdiocese of Dhaka (Bangladesh), who is the titular of our parish of Our Lady of the Blessed Sacrament and Canadian Martyrs in Rome, Fr. Eugênio Barbosa Martins sss, superior general, and Fr. Maurizio Zorzi sss, with the approval of the General Council, chose me to represent the Congregation and the Parish for the occasion of the Papal visit to Bangladesh on 1st and 2nd of December 2017. 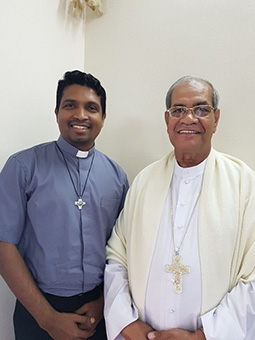 The visit of Pope Francis to Bangladesh was significant in many ways: a) Historically: Bangladesh celebrates 500 years of the arrival of Christianity in the country, b) Spiritually: As the Church in Bangladesh received its first Cardinal, the visit of the Pope gives hope to the faithful, and c) Politically: The issue of Rohingya refugees is causing problems in south Asia. The Pope’s visit to Myanmar and Bangladesh was seen as crucial because both countries are directly involved in the issue. The two days program of the visit of the Pope was very well executed with utmost security.

In the Mass presided by the Pope, 16 deacons were ordained priests and there were around 90,000 to 100,000 people who participated. The Pope preached on the sanctity of the priesthood and requested people to always pray for priests.

In the afternoon Pope Francis met the foreign dignitaries invited by the Church of Bangladesh. Cardinal D’Rosario introduced everyone to the Pope including our Congregation. The inter-religious meeting where 2,500 people and heads of various religions participated was a witnessing example for the Pope.

The Pope gave three advices to the clergy and religious: 1) Appreciate your vocation, 2) Stay away from the gossipers because they are the modern terrorist, and 3) Be a joyful person. These were proved to be timely advices for the religious and very much appreciated.

In the evening before leaving Bangladesh, Pope Francis met the youth. He told them to respect the elderly and shun away from false happiness. More than his words, his gestures spoke even louder.

The next day, the 3rd of December 2017, I went to the Archdiocese of Chittagong which is in the southern part of the country. The archbishop has invited the Congregation of the Blessed Sacrament to the archdiocese and agreed to give us the cathedral parish of Our Lady of the Holy Rosary. This parish church which now caters to 5,515 Catholics was built in the year 1600. Though it will be an initiative of the SSS Asian Conference, the Province of Christ the Bread of Life (Sri Lanka) with the help of the Province of Kristu Jyoti (India) is working out the logistics to start a community in Chittagong.

Christianity first arrived to Bangladesh when traders from Portugal came through the region of Chittagong in the year 1518. Thus, the archdiocese and the Church in Bangladesh celebrate 500 years of the presence of Christianity in 2018. To commemorate this occasion, the Archbishop of Chittagong, Most Rev. Moses Costa, decided to invite two religious congregations of men, the Society of the Divine Word (SVD) and the Congregation of the Blessed Sacrament (SSS). The archbishop chose to invite both congregations as their charisms are directly inspired and connected to the “Word” and “Flesh” of Jesus Christ, with the hope that they can help deepen the spirituality of the laity, religious and clergy in the archdiocese. 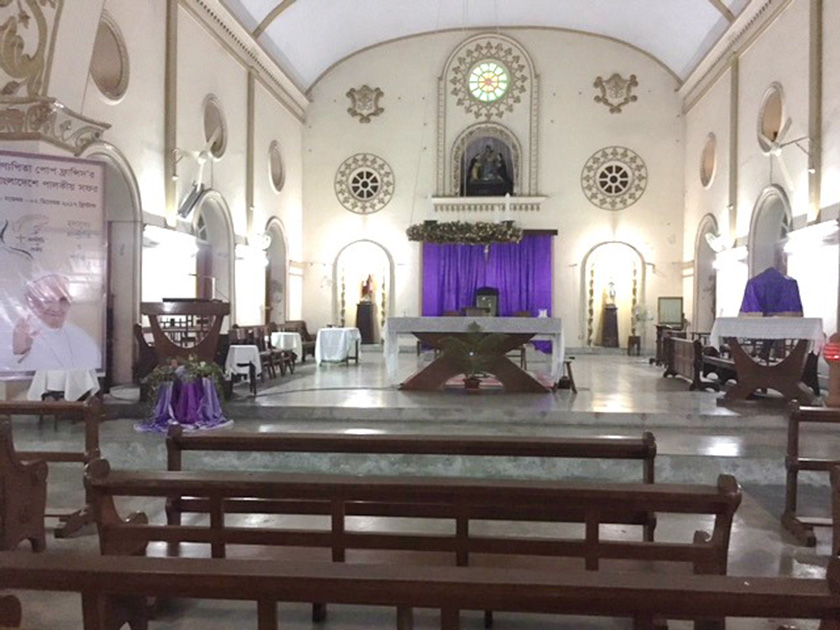 We see very rarely a bishop giving a cathedral parish to a religious congregation. But the archbishop of Chittagong made the decision to give the cathedral parish to the Congregation of the Blessed Sacrament for the following two reasons: 1) They are to deepen the Eucharistic spirituality among the clergy, religious and laity, and 2) So that the clergy of the archdiocese will be free to work in the interior parishes where foreigners cannot go. The Archbishop wants to have the religious of the Congregation of the Blessed Sacrament as early as possible and before the end of 2018.

Along with the promising project in Bangladesh, we are also following up the project of SSS presence in Taiwan. After having received an invitation from John Baptist Lee, the bishop of Hsinchu Diocese, on the 20th of October 2017, Fr. Joseph Matitu sss, provincial superior of the Province of Our Lady of the Assumption (Philippines), and Fr. Joseph Ai sss and Fr. Michael Thanh sss from the Province of the Vietnamese Martyrs (Vietnam) had an initial meeting with Bishop John and his vicar general, Fr. Truong. The bishop expressed his warm welcome and was joyful for this evangelical collaboration. He hopes that SSS religious will be sent soon in order to start a Eucharistic mission in his diocese.

Our presence in these countries will be very challenging but it will be aptly in the direction of our founder’s dream to spread the Eucharistic fire on the four corners of the world. We enjoin the whole Eymardian Family to pray for the success of these new endeavors.