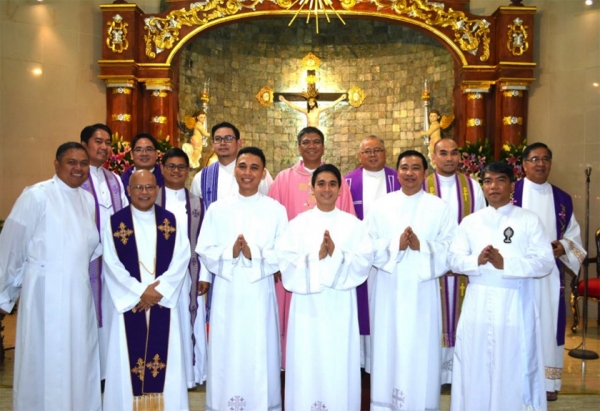 The Province of Our Lady of the Assumption is grateful to God for the gift of vocation to the religious life as Br. Ian Michael C. Abad, SSS, had his first profession of vows to the religious life in the Congregation of the Blessed Sacrament. Likewise, Br. Eddienel G. Villa, SSS, Br. Tedley T. Villanueva, SSS, and Br. Victor Clemence B. Posadas, SSS, were installed to the Ministry of Acolyte. These events were solemnly celebrated with the Holy Eucharist presided by the provincial superior, Rev. Fr. Joseph dC. Matitu, SSS, on December 17, 2017 (Third Sunday of Advent), at the Eymard Formation Center, New Manila, Quezon City.

Br. Ian Michael C. Abad, SSS, is from the Diocese of Malolos. He is a graduate of Bachelor of Science in Electrical Engineering. He had already undergone the formation program of the Congregation of the Blessed Sacrament and completed his requirements for Sacred Orders at San Carlos Graduate School of Theology in 2013. However, he took his regency and after proper discernment, he decided to return to the Congregation. He took his novitiate reentry program from June to December 2017 and was approved for his first profession of vows.

By publicly taking the first vows of Chastity, Poverty and Obedience in the Congregation, Br. Ian responded to the call of the Lord who invites him to leave all things to follow him and committed himself in the Church to live the Gospel in a radical way as expressed and taught by St. Peter Julian Eymard in his total gift of self. His profession of evangelical counsels also expresses his consecration to God in the service of his fellow human beings, a witness to a world yet to come in the spirit of the Beatitudes (c.f. ROL No. 15).

Br. Eddienel G. Villa, SSS, Br. Tedley T. Villanueva, SSS, and Br. Victor Clemence B. Posadas, SSS, are currently in their second year in Theology at San Carlos Seminary Graduate School of Theology. They are installed to the ministry of acolyte to serve at the altar and to assist the priest and deacon. The installation to this ministry is also a necessary step toward the sacred orders and a preparation for their upcoming pastoral year in 2018.

Fr. Reynaldo Capili, SSS, the Vicar Provincial and Director of Students, delivered the homily. He stressed on the humility of John the Baptist in doing his mission to prepare the way of the Lord through the call of conversion. Before the final blessing, the Scholasticate Community shared the joy of the upcoming Christmas Season by serenading the congregation with Christmas carols.

We are requested to continuously pray for the perseverance of our brothers in formation especially the newly professed and newly installed to the ministry of acolyte as they place themselves humbly yet happily to the service of the Church.

Tweet
Published in News
More in this category: « Priestly Ordinations in Vietnam "Voices of December: Concert for a Cause" - A Huge Success »
back to top