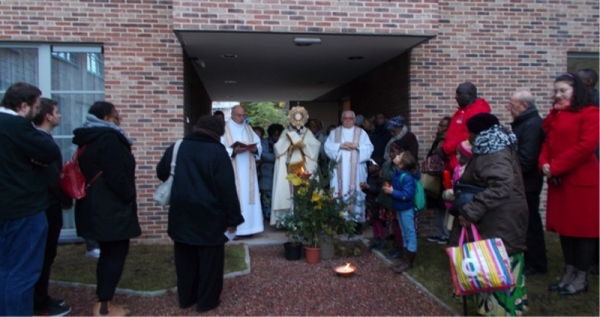 On 17 November 1867 Peter-Julian Eymard arrived at the Chaussée de Wavre to begin adoration of the Eucharist. 150 years later to the day Father General Eugênio Barbosa Martins SSS came from Rome to celebrate this anniversary. A church built under the impetus of a saint is almost unique in Brussels. This church is an unusual large-scale building in the European quarter, which was not demolished 20 years after being constructed, and which is still standing despite real estate speculation. This is a church, where the generosity of the Blessed Sacrament Fathers allowed, just 20 years ago, the welcoming of a renewal Community of La Viale Europe in which about a thousand young people, mostly trainees for the European Union lived and are living an experience of a community life of prayer and simplicity according to the Gospel. 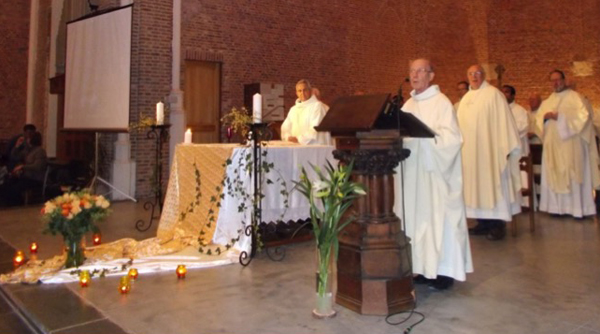 For the last ten years, through the collaboration of the Blessed Sacrament Fathers and La Viale Europe, the church, chapel and site have been entirely renovated. A thousand faithful come here to pray each week and they appreciate its beauty and excellent acoustics. This is a church where daily fidelity is uninterrupted for 150 years in assuring watchfulness in prayer since the beginning of the European institutions. It is a church that has brought to birth a new Beguinage of 20 dwellings, a village in the city that is a response to the urban crisis.

Ten years ago a few friends started in Belgium the Festival of Adoration. To give thanks to God and remain faithful to these missions, a festive Eucharist and a night of Adoration brought together on 18 and 19 November 2017 the active groups in the house and numerous friends and faithful: the Blessed Sacrament Fathers, the community of La Viale Europe, Jesuits, Beguinage Viaduc, the Sisters of the Sacred Heart, the African prayer group Kristu Bolingo, the English-speaking and Philippine group, the prayer group Alleluia and members of the Youth Mass.  At this time when we risk living outside of ourselves, we have need of intense occasions of interiority. In our everyday living we experience Eucharistic adoration as a source of joy, strength and peace. As a child put it: “this is a spiritual sunbath”.

On Sunday morning Father General carried the Blessed Sacrament in procession to bless the new houses of the Beguinage. Then a festive breakfast at which the faithful gathered there was a surprise in store insofar as they learnt that all the food, bread, jam, yogurt etc. was homemade. 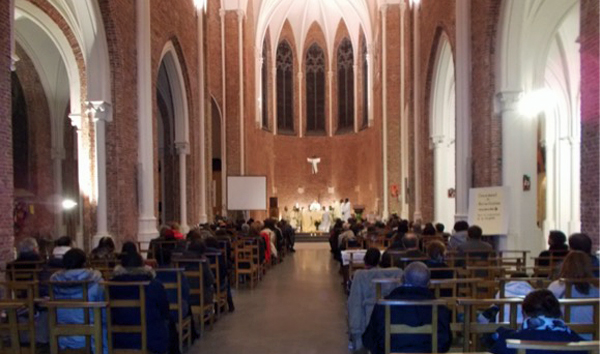 Last modified on Friday, 15 December 2017 22:56
Tweet
Published in News
More in this category: « January 6 - Feast of the Epiphany of the Lord Servitium Christi in Vietnam »
back to top