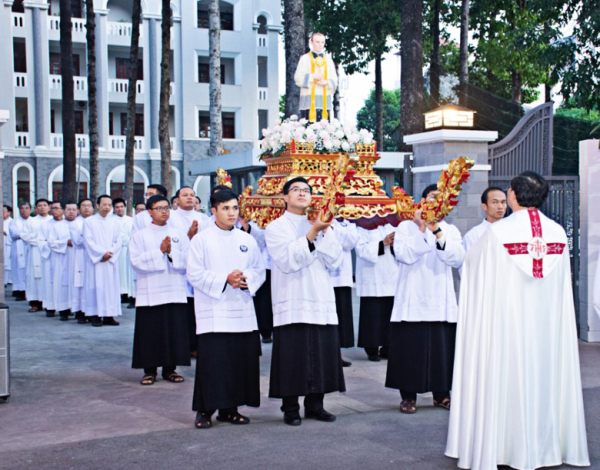 The day on December 9th, 2022 was so special for the whole members of the Eymardian family, particularly for the Congregation of the Blessed Sacrament in Vietnam. For 60 years ago on December 9th, 1962, the Blessed Peter Julian Eymard was solemnly canonized by pope John XXIII. To celebrate this significant and memorable event, in early morning, many SSS priests and brothers, sisters from the servant of the Blessed sacrament, sisters from the secular institute of Servitium Christi, and great numbers of Associates from various dioceses were present at the courtyard of the provincial house.

At 6am, the procession took place, headed by the holy cross and incense and followed up by the community and the splendorously decorated sedan-chair of saint Peter Julian Eymard's statue. After people in the procession had entered the church, Reverend Father Joseph Pham Dinh Ai, the provincial superior, gave them his own sharing. He said: Today is a ceremonial day for all the Eymardian family's members who have one common ideal that “is to live the mystery of the Eucharist fully and to make known its meaning, so that Christ's reign may come to the glory of God and be revealed to the world” (RL 1).

After the sharing, the gathering's atmosphere was made more vivid and fascinating by the acting of SSS sisters and brothers about the life of Fr. Eymard. At the end of the performance, the community watched a video about the context on the day of the canonisation, December 9th, 1962 in St. Peter's Basilica, Rome.

Next to the important part of the gathering is the concelebration of the Eucharist. The Mass was presided by Fr Joseph Ai, provincial superior, along with SSS priests. Fr Joseph Tro, vicar of the provincial superior, who gave sharing on the Gospel of John to the community, insisted that “following in the footsteps of fr Eymard, all of us are called to adorers of Jesus Christ in the Eucharist sincerely. Jesus Christ in the Eucharist must be central in our lives and for our activities. The Eucharist is the source for our activities entirely”. 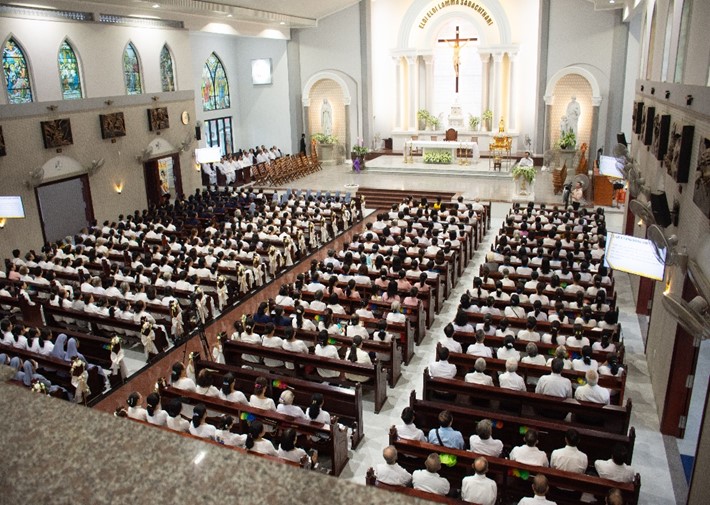 At the end of the Mass, the provincial superior expressed his deep gratitude to priests and religious, Khiet Tam parish council, all members of the SSS aggregation (association) for their presence and collaboration, so that the gathering for Fr. Eymard's canonisation anniversary was celebrated solemnly and devotionally. Moreover, he said that “we do not only rejoice to praise our God and so proud for our Founder as a saint, ‘an apostles of the Eucharist’, rather than we should learn our Founder's example about love and service in Jesus Christ of the Eucharist”.

After the Eucharist, everyone shared together in breakfast prepared by sisters of Servitium Christi at the courtyard of the provincial house. Finally, there was the Eucharistic Adoration for sisters and brothers of the SSS Aggregation in the church at 9am. 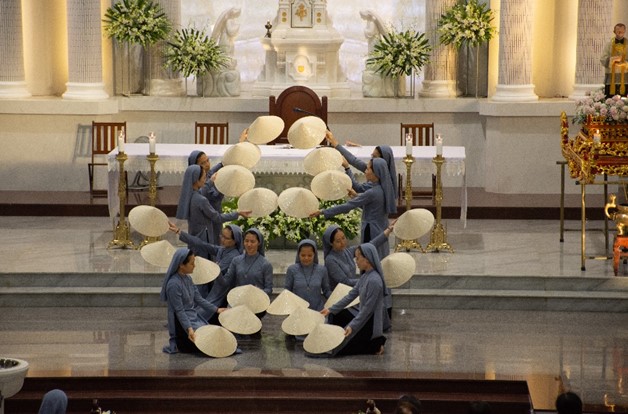 Thanks be to God for granting us an apostle of the Eucharist as Fr. Eymard. He is a wonderful pattern to which we follow, through using his life totally in serving and proclaiming the mystery of the Eucharist. May we imitate his life in order to become adorers of the Eucharist faithfully and worthily.

Last modified on Wednesday, 25 January 2023 11:03
Tweet
Published in News
More in this category: « 60th anniversary of the Canonisation of Saint Peter-Julian Eymard New members of the Aggregation at San Benedetto del Tronto, Italy »
back to top