Celebration of the Twenty-sixth and last Provincial Chapter in Canada 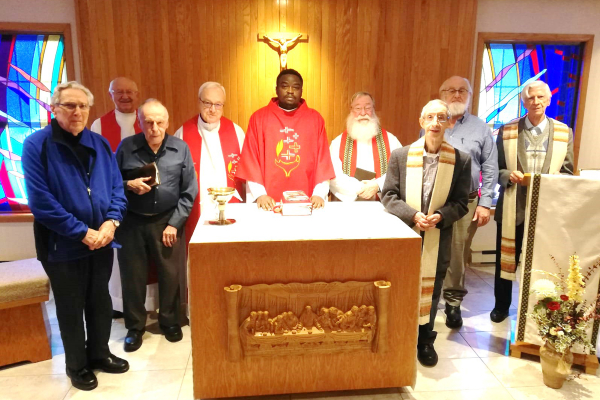 Convened by the Provincial Superior last June, the last Provincial Chapter for SSS religious on Canadian soil was held in the house of the Novitiate of Loretteville in Quebec, from 21 to 23 November 2022. Apart from three confreres prevented by their state of health, all the religious took part in this traditional institutional pillar of our charismatic Eymardian family. Also present among the capitulars was Father Jack Harold Nkodia sss, a member of the Cardinal Émile Biayenda Region, a delegate to the Provincial Chapter.

In the presence and under the guidance of Father Agostinho Maholele, a member of the General Curia, this Provincial Chapter, lived in a serene atmosphere of fraternity, was a time of discernment and important decisions. In broad outline of questions dealt with during this large gathering, three major issues well and truly absorbed and focused our attention, namely, a reflection related to vulnerability, the exercise of planning for the future of our SSS brothers on Canadian soil, and the future of the Cardinal Émile Biayenda Region.

In presenting the present state of the St John the Baptist Province, Father Ghislain Cossette, the Provincial Superior, invited us to meditate and reflect on vulnerability: “Our vulnerability, he stated, has led us to say ‘yes’. ‘Yes’, to the discomfort of the present, ‘yes’, to the uncertainty of the future. ‘Yes’, to the mystery of life. At the heart of our vulnerabilities, he continued, we have the possibility of reliving the gesture of Christ at the Last Supper: to submit ourselves with trust to the Father, to open ourselves to others and to become creative in the way of breaking the bread of our daily life, to bring life to the world.”

Apropos the exercise of planning for the future of our SSS confreres in Canada, taking into account the present number of religious, the lack of recruiting new members, the actual average age of religious, a recommendation was voted on regarding the suppression the Province of St John the Baptist at the next General Chapter (November 2023). An in-depth study was presented to us by two legal advisers, the purpose of this being to better ensure the administration of the material business of the Canadian entity and the security of its members until the end of the existence of this entity as well as the transfer of its property. Moreover, a particular and unprecedented feature in the celebration of the Provincial Chapter was that no elections were held. Indeed, with the authorization of the Holy See, the present Provincial Council’s mandate has been extended until the next General Chapter in 2023.

From the outset, the twenty-sixth Provincial Chapter expressed itself favourable to the Cardinal Émile Biayenda Region becoming erected as a Province at the next General Chapter. It was voted that the Province of Saint John the Baptist of Canada would continue assisting the said Region to be capable of correctly establishing administrative management and human resources.

Last modified on Wednesday, 21 December 2022 09:58
Tweet
Published in News
More in this category: « Report from the European Conference First anniversary of the parish of the Blessed Sacrament of Kilobelobe »
back to top