Province of the Vietnamese Martyrs 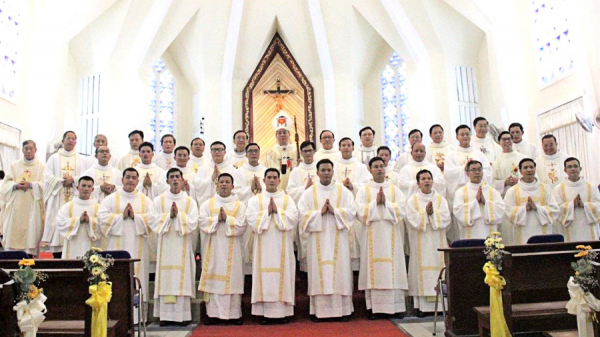 The Ordination Mass of the two priests

Concelebrating with Archbishop Joseph was the Superior Provincial of Congregation of the Most Holy Redeemer, the Superior Provincial of Congregation of the Blessed Sacrament and a large number of priests inside and outside the two Congregations. Many lay brothers and sisters from all over the country also attended this solemn Mass, which was celebrated with fervor, solemnity, and filled with the sacred beauty of the Christian liturgy. 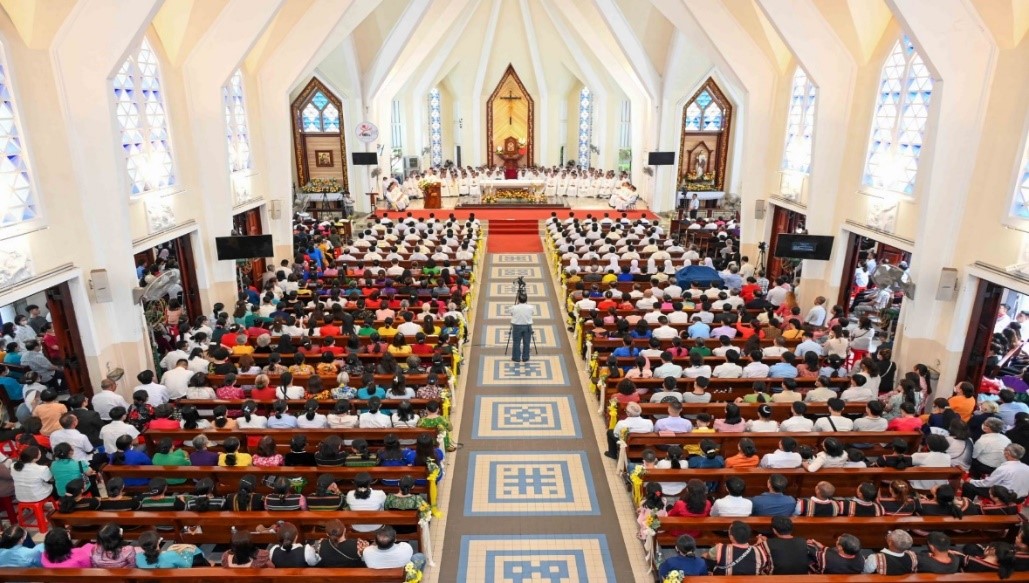 In his homily, Archbishop Joseph emphasized the priest’s role and duty of reconciliation as “the embodiment of Christ”, especially through the celebration of the Eucharist and the sacrament of reconciliation. “Little people, lowly people, unworthy people, but called by God and transformed by God to become God’s embodiment, become a sign of God’s presence among the human community, in the heart of the Church”. The Archbishop told the ordained: “As for us, we must make our lives less unworthy, so that we can truly become a sign of God.” “You will be the embodiment of God, a sign of God. The sign must be clear… We must pray the Holy Spirit to consecrate us every day.”

The Archbishop also said: “The priest’s ministry is the ministry of reconciliation. Jesus shed his blood to reconcile humanity with God. Our mission, priests, is to bring about reconciliation between humanity and God. We carry that ministry in a special way through two sacraments, the Eucharist and the sacrament of confession.”

Mass ended with a solemn Blessing at 11:15. The new priests happily took pictures with Archbishop Joseph, priests and their relatives. 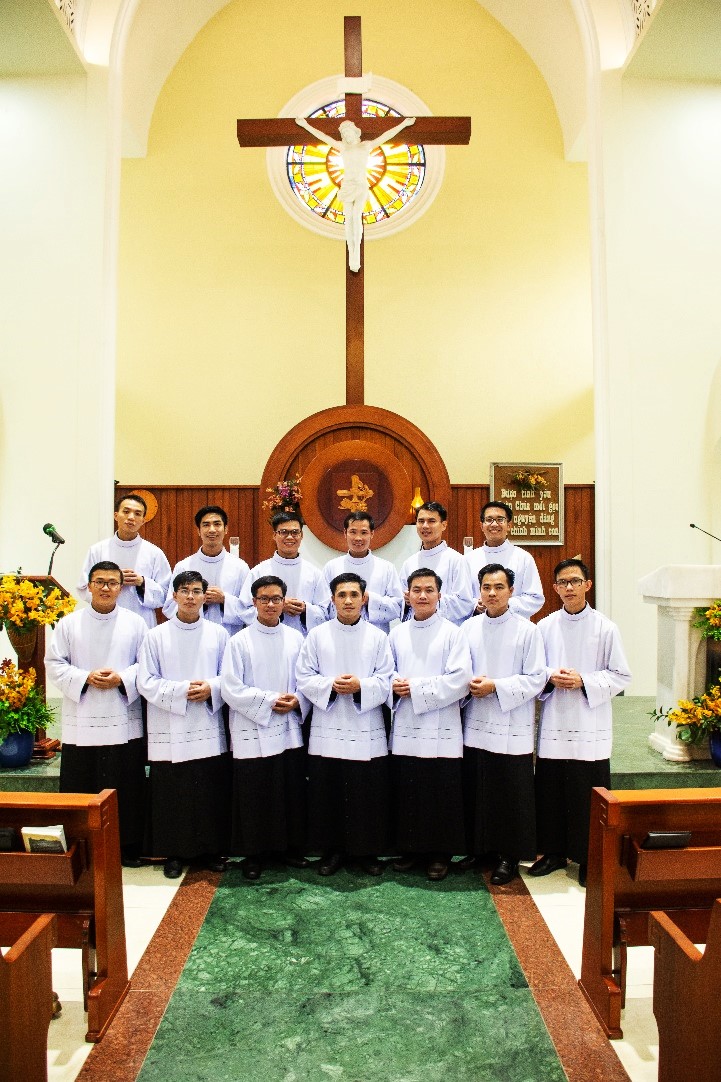 The First Vows Mass for 13 brothers of the Vietnamese Province was solemnly celebrated at Khiet Tam parish, Saigon archdiocese at 9:00 am on Monday, August 1st, 2022.

The celebrant of the Mass was Superior Provincial Joseph Pham Dinh Ai, S.S.S. Concelebrating with him were a large number of Blessed Sacrament Congregation priests from all communities in the country and abroad, as well as a number of priests who is familiar with the new professed brothers. A large number of religious men and women and their grandparents, parents, relatives and friends attended Mass today to pray for them.

Mass was held in a solemn and fervent atmosphere. May the intercession of Saint Peter Julian Eymard, the founder of the Blessed Sacrament Congregation and Our Lady of the Eucharist, help the new professed brothers to remain faithful in their Eucharistic vocation and mission.

The Mass ended at 11:00, then the new professed brothers took photos with the concelebrants and guests. After Mass, all guests shared a party which is full of fraternity in the hall of the Congregation's Headquarters.

On the feast Day of the Founder of our Congregation on 2nd August 2022, we have 7 brothers committed themselves definitively from our province to the Congregation of the Blessed Sacrament: 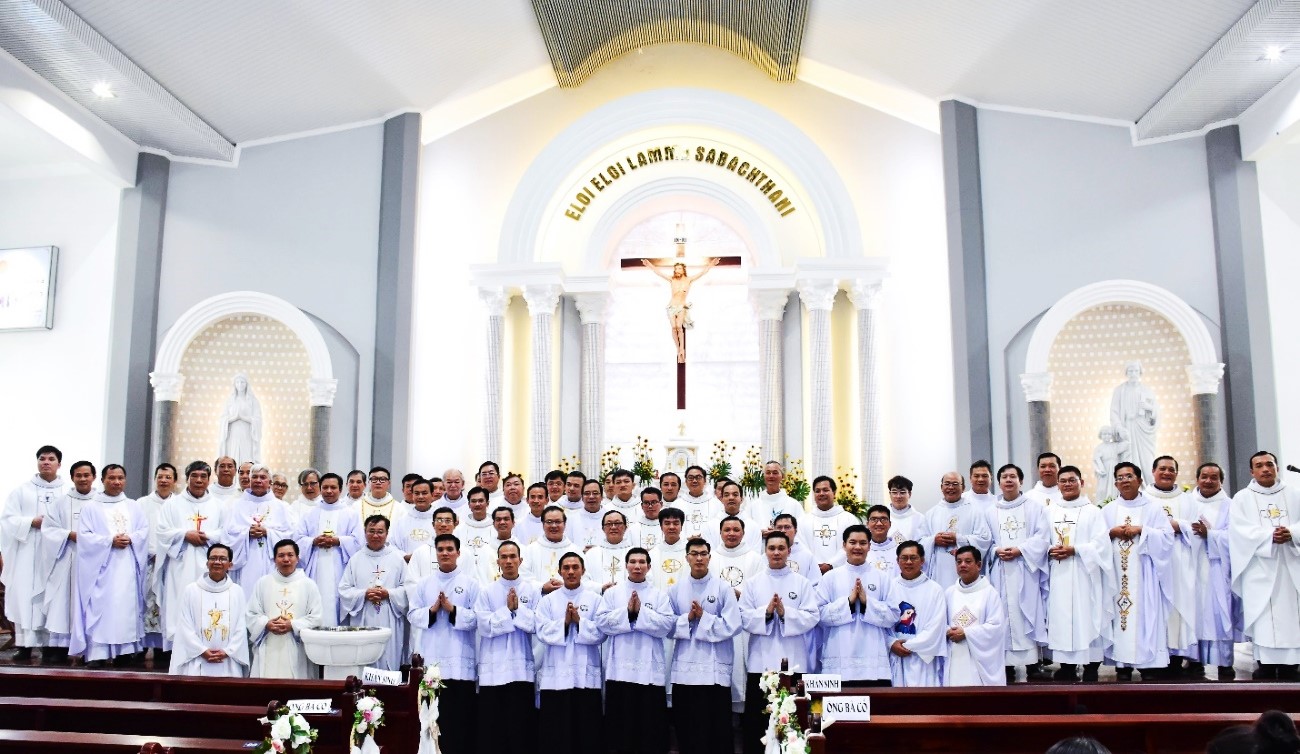 In his homily Father Francis Xavier Phan Duc SSS said: “Consecrated behavior will lead the religious into a style of Eucharistic life in order to the SSS religious can live fully the fundamental vocation, which is the Christian vocation.” And in this also homily, Father Duc confirmed: “Today, 7 of our brothers are preparing to make a final vow, to fully enter into the covenant of love with God, to commit themselves completely to Eucharistic life which is the life of love and the way of love, because the Eucharist is a sacrament of love, an eloquent testimony of the love of God loved human being until the end of the world.”

The Rite of Profession Vows was so fervent, so solemn, and so moving! Each brother went and placed his hand in the hand of Provincial Superior Joseph Phạm Dình Ai, who presided in this Mass, in the presence of the concelebrating priest and religious confreres of the Congregation of the Blessed Sacrament and the whole Christian community in the church Khiet Tam. Then our brothers proclaimed the words of lifelong consecration to God: “I am …, perpetually profess the vows of chastity, poverty and obedience according to the Rule of Life of the Congregation of the Blessed Sacrament”. After the prayer of blessing, the Provincial Superior Ai accepted the brothers as official members of our Congregation with all obligations and rights. Father Ai added: “You will bring all your abilities and enthusiasm together to build the Congregation.”

At the end of the Mass, the Provincial Superior, on behalf of all the Eucharistic priests and religious, thanked the concelebrants, religious, the benefactors, their relatives and the entire community in also spirit of thanksgiving to God. The Mass is over, but for 7 brothers, it is a new beginning for a new mission. The mission will become a minister of the Eucharist following the Father Eymard, Founder of the Blessed Sacrament Congregation, although our brothers are still imperfective and weak human beings.

Last modified on Friday, 23 September 2022 10:13
Tweet
Published in News
More in this category: « The Feast of Saint Peter-Julian Eymard, patron of the parish of La Mure Events in Mozambique starting from 31 July 2022 »
back to top