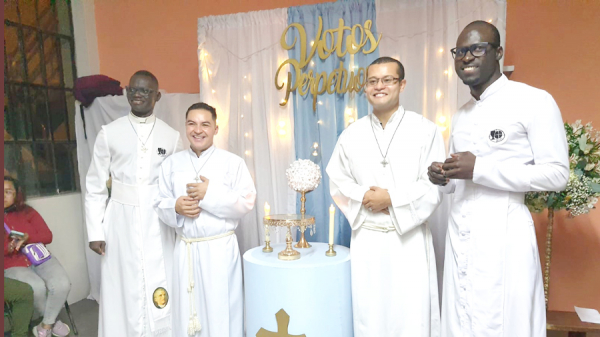 On Friday 13 May 2022, while celebrating the hundred and sixty-sixth (166) anniversary of the foundation of our Congregation, Brothers Christophe Mendy and Francisco Mendy (from the Province of Our Lady of Africa, Senegal-Guinée Bissao), Juan David Zapata Patiño and Wilmer Jobany Gómez Rodríguez (from the Province of Saint John XXIII, Colombia-Peru) had the grace and joy of making their perpetual profession in the Congregation of the Blessed Sacrament according to the Rule of Life.

This event had been preceded by three months of preparation for perpetual vows under the direction of Fr Camille Gagnon, a preparation which led us to consider several themes concerning the life of the Congregation, such as its history, the life of the Founder and his journey and, of course, to reflect and meditate on the vows of chastity, poverty and obedience according to the Rule of Life.

This preparatory phase thus enabled us to reread the writings of the Founder, to reflect on the Rule of Life but above all, to rediscover the beauty and the depth of the three vows in the light of the commentary made by the former Superior General Fr Anthony McSweeney. Also, it was an opportunity to revisit the essential texts regarding, on the one hand, an understanding of our history as a religious family and, on the other hand, the life of the Congregation itself as related to expressing our charism, spirituality and mission.

In this perspective the emphasis was placed, for example, on the relationship between Father Eymard and the Holy Scriptures, on the one hand, and between the Founder and the laity, on the other. Likewise, attention was drawn to reviewing items such as the interior cenacle and frequent communion according to Father Eymard.

Moreover, apropos the celebration of perpetual profession itself, this was presided over by Fr Carlos José Cierra Rodríguez, Provincial Superior of the Province of Saint John XXIII (Colombia-Peru), who made the trip to Lima. In his homily, he emphasised fidelity to the Lord and to his Church in view of the harsh reality of the growing number of religious leaving consecrated life, as well as the challenges that await us in our mission about having to respond adequately to the hungers of the men and women of our time.

In view of the above, we express our joy and pride to belong to the Congregation of the Blessed Sacrament, but above all, to know that we are welcomed and accepted as its members, perpetually professed religious. Also, we are grateful to God who called us and who gave us the gift of the Eucharistic vocation. Our gratitude also goes to all the confreres who accompanied us in formation (pre-novitiate, novitiate and scholasticate) during these ten years.

In a particular way we (Brothers Christophe and Francisco) express our sincere thanks to our Province (Our Lady of Africa, Senegal-Guinea Bissao) as well as to the Blessed Sacrament Latin American Conference (CLAS), which welcomed us and formed during the three years of study and stay in Latin America. We are grateful for the experience of internationality that we lived in the scholasticate and that we continue to live on Latin American soil.

But above all we express our gratitude to Fr Camille Gagnon for having accepted to be the director of the Eymardian Year 2022 and for having enriched us by his experience of the Congregation and of consecrated life and this from the level of his fifty-seven years of religious life and fifty years of priesthood.