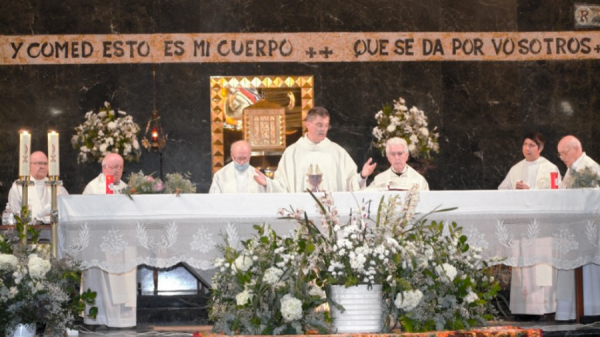 On Tuesday, 28 September 2021, the 25th anniversary of Fr José Antonio Rivera Ruiz as a priest SSS was commemorated. In order that the majority of the community of the Blessed Sacrament parish, on 3 Sáinz de Baranda street, in Madrid, could be present at this event, the Eucharist of thanksgiving was celebrated the following Sunday, 3 October, at 1 p.m., as was Fr José Antonio’s habitual Sunday celebration.

Seven Blessed Sacrament priests concelebrated at this Eucharist presided over by Fr José Antonio, who was also accompanied by his family, parents, brothers and nephews, and a large number of parishioners.

The celebration began with a greeting made by a parishioner, who expressed congratulations for the “25 years of priestly life, always in the Congregation of the Blessed Sacrament, at Madid from 2005 and, as Parish Priest in this church, from the year 2012. For all that we are united, the Fathers of the Community, your family, parishioners, and friends, in a sincere and heartfelt congratulations, grateful for your faithfulness, closeness, simplicity and affection towards everyone.

CONGRATULATIONS! Father José Antonio on your Priestly Silver Jubilee as a Blessed Sacrament religious and for being among us.” 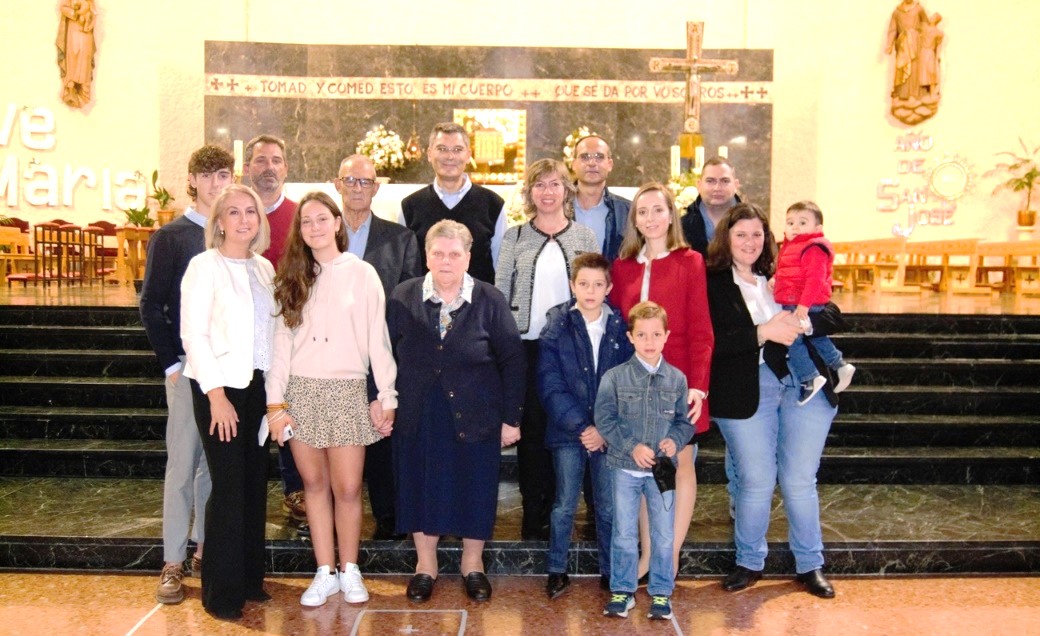 Father Jose Antonio with his family

We highlight some items from the homily given by Fr José Antonio, who divided it into two different points. In the first of them he made a comment on the readings that the Liturgy of the Word proposed: he reflected on the difference between being content and being happy. Certainly, Father stated, God wants us to be happy, even though sometimes we are not pleased about the responsibilities and obligations that each one must carry out. He referred, in allusion to the Gospel, the theme of which was that of marital failure to which the Pharisees pointed, or, alluding to his own life, to possible priestly failure. He insists always on moral obligations, but forgets to add “about being happy”. “God does not promise us an easy life, but a happiness that is hidden and emerges little by little and in a constant and silent way.”

The second theme developed in his homily referred to “Sunday Communion”, a proposal promoted by Cardinal Carlos Osoro. Quoting the late Cardinal Martini, he pointed to the relationship between the Eucharist and Communion, referring to the following: “there comes a time when we cannot understand the Eucharist more deeply, shaking our heads on reading books or contemplating the Lord exposed in the pyx under the form of bread or in the tabernacle. Indeed, he said, the Eucharist is a force and whoever does not connect himself to the living body of the Church, being incorporated with the path of the local church, allowing himself to be called by it, will not be able to understand the full vitality of the Eucharist.”

Especially significant was the time of thanksgiving at the end of the celebration, when he began of offer thanks to God and for the efforts and involvement of all those who had made that occasion possible in a very secret way, contacting his family, his companions, the surprise of the gift of the trip to the Holy Land. He continued in thanking his family, his confreres in the Congregation, explicitly mentioning Fathers Ildefonso and Lino Emilio, who so influenced the dawning of his vocation, and the people with whom in these 25 years he exercised priestly ministry in the places where he had been: Madrid, Bilbao, Italy, the United States. He concluded, expressing awareness of his limits, asking forgiveness for what he could have said or done, for disappointing people by not providing the expected and appropriate treatment, for not reflecting God’s love.

The Eucharist ended in the same atmosphere of thanksgiving to the Lord for the 25th anniversary of Father José Antonio Rivera Ruiz’s priesthood.

Last modified on Wednesday, 17 November 2021 10:00
Tweet
Published in News
More in this category: « HISTORY: Foundation of the Congregation in Habana-Cuba
back to top