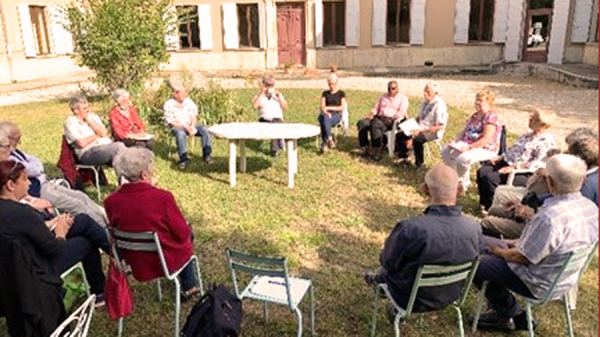 Report of the meeting on Saturday, 18 September 2021, at Colombier-Saugnieu.

After being welcomed with a cup of coffee, we had a time of prayer led by Fr Norbert in the chapel. We sang Lauds after each psalm about which Fr Norbert read some texts.

At 10:30, Edith began the morning session by introducing the Fraternities and the priests accompanying them: Father Paul at Colombier, Father Patrick at Décines and Grenoble, and Father Mateus at La Mure. Edith and Denise spent some time in presenting the book ‘God a passion’ by Alain Durant, a Dominican priest living in the convent of Tourette. 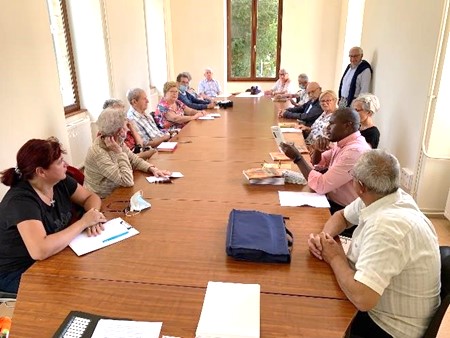 Two extracts from this book were offered to us by Father Patrick in order to maintain a spiritual bond between our Fraternities during the lockdown when sharing was not possible at meetings. This book relates to our search about deepening our faith in God revealed by Jesus Christ who invites us to live the Eucharist in our life, P 14: “God is in the very depths of my existence as an interior force pulsating in my being and life.”

Father Mateus shared what he found on reading this book. Here is only a proposal of the work. A sharing in nine meetings is foreseen from October to June 2021/2022, with the possibility of meeting the author Alain Durand.

At 11:30 the celebration of the Eucharist took place, presided by Father Eugène. 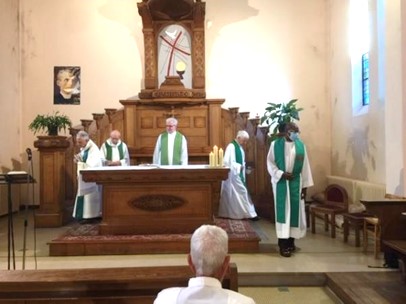 At 12:30 convivial time, an aperitif and lunch in the pleasant garden of Colombier.

At 2 p.m., dialogue with Father Eugene referring back to the month of June: Meetings, Retreat in March, sharing of the prayer of adoration, communication of reports to the priests who animate the fraternities, organization of a meeting of the Fraternities of Holland and Belgium.

Father Eugène gave a description of the history of the Associates. He referred to the website www.eymard.org and spoke of the numerous initiatives, particularly L.I.T.E.S. He recalled the Project of Life in 2010 and the Chapter in 2017 at Chicago. A single family comprising five important ideas:

Father Eugène also gave a resumé of the reports of India and Great Britain.

Some questions were raised: what expectations do the Religious have vis-à-vis the Laity? How coordinate the needs of the different fraternities, and above all how to foster communication?

A commission of aggregates has been set up of Religious and Lay Associates of the Province of Saint-Peter-Julian Eymard (France, Belgium, Netherlands, Switzerland, Germany, Mozambique), comprising Fathers Eugene, Aad and Mateus, and the Committed, Thea , Ellen, Edith and Denise. Fr. Eugène thinks it seems difficult to establish something in common between France and Holland, given the difference of language and in the way of functioning, which the Fraternities decide. In France, it would be sensible to look for traces of the Fraternities of Rouen, Fécamps...

We turned back then to consider the above-mentioned book. It became clear in the discussion: whether or not each Fraternity would decide to discuss this book which is a ‘proposal’ to promote going forward in the faith. The proposal to meet Alain Durand will be arranged in the month of November when the Fraternities will begin to work on the book.

To follow up on requests from the month of June, we recall two important occasions:

➢ Father Paul will conduct a Day of Recollection on 13 November 2021 on the theme ‘the Eucharist Incarnated’.
➢ He will animate the Retreat in March 2022 on ‘The Eucharist in life’.

Our meeting ended at 4:00 p.m. with a prayer of thanksgiving led by Father Paul.

Denise et Edith
Members of the Commission of Lay Aggregates