Pilgrimage in Paris from 31 August to 3 September 2021 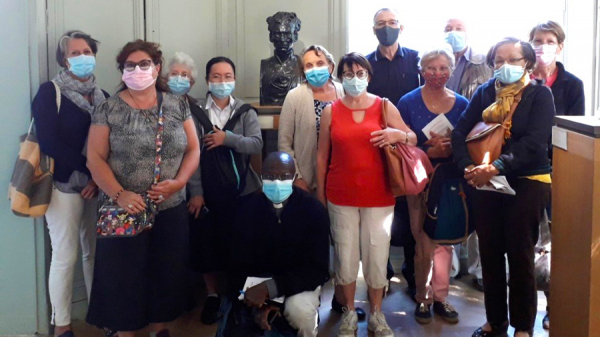 This pilgrimage was postponed twice!

With happiness and curiosity, under a benevolent sun we were able finally to set off to discover the places marking the itinerary of Saint Peter-Julian Eymard’s life.

We were eleven pilgrims starting out from Our Lady of Osier - the place where the young priest Peter-Julian celebrated his first mass - and from La Mure, and one servant of the Bl. Sacrament from Vietnam. Father Manuel organized our stay and sketched a roadmap to accompany our journey.

And, René Fantin, in charge of the Osier shrine, shared with us his extensive knowledge of the history and significant places of Paris; thanks to both of them. Let’s set out!

Our Lady of Victories

Our steps led us naturally to Our Lady of Victories, where during his first visit to Paris Father Eymard celebrated Mass on 20 January 1849. He was struck by the eucharistic worship being carried out in the capital: “There are some beautiful souls in Paris and much prayer. Every day in one of the city churches, there is perpetual adoration and exposition of the Blessed Sacrament day and night … I believe that so many prayers will touch the heart of God” (CO 142). Impelled by this experience, Father Eymard resolved to dedicate himself entirely to Jesus incarnated in the Eucharist.

We learnt that in this place six years later, on 30 April 1856, Father Eymard returned to Paris for a last period of discernment, which led to leaving, with a costly wrench, the Marists to found a congregation dedicated to the Divine Cenacle. Father Eymard went to this address where he was the guest of a small community. “I was given a drafty, unheated room; and then another which was very damp. At night my sheets were as damp as if they had just been brought in from the dew; the food was poor. God sustained me” (CO 607).

The twelve long and difficult days, however, issued in the very great joy of seeing his foundation approved by Mgr. Sibour, the Archbishop of Paris.

Our gazing intensely through the gates at the building that was the first location of the Congregation intrigued the directress of the place. After exchanging a few words, she kindly opened the doors to us and described the activities carried out within her establishment. The building has become a home for the deaf and hard of hearing. There remains the small house decorated with a cross. Father Eymard wrote of this period “I cannot tell you the peace and joy my soul experiences to see that I am called to the divine Cenacle! Nothing strikes me as vile or humiliating to prepare the Cenacle. We have taken care of moving things, waxing floors, acting as porters. I think I would even become a cook. Everything is divine when we serve a God” (CO 602). The living conditions here were the most rudimentary but Father Eymard’s faith was unshakeable and the presence of Jesus at his side was palpable.

We continued our journey to where the community had to move following the sale of the Chateaubriand villa. Father Eymard purchased a property and blessed the chapel on Easter Sunday, 4 April 1858. He realized his ideal of a mission that was both contemplative and apostolic. It is here that the work, so long awaited by Bishop Sibour, the first communion of adults and young workers, began. The work consists of “contacting these young workers, meet them in the evening when they leave the factory – for, during the day, it’s impossible, they have no time – ; to teach them the basic principles of religion, and coordinate in this way with the parish catechesis that they cannot attend: this will be the special work of the Religious of the most Blessed Sacrament... each year it has the consolation to present to the Eucharistic banquet and the sacrament of Confirmation, from 100 to 150 young workers” (PG 243,2).

It was during the year 1858 that Father Eymard likewise launched the bases for setting up the feminine branch of his Congregation under the leadership of Marguerite Guillot, whom Father Eymard had spiritually guided in Lyons. The first community of the Sister Servants of the Blessed Sacrament was established in simplicity. The Sister Servants became involved in the work of the first communion of young girls. Another move became necessary since the premises had to be demolished to allow the construction of the boulevards; here the boulevard Arago.

We were then on this boulevard, not far from the previous place. Whereas his activity and work could therefore retain the same intensity, Father Eymard was exhausted both morally - having to face many criticisms - and physically. “Do pray for me, dear sister; I need it immensely. Sadness is overtaking my soul with desolation. Fortunately, it doesn’t show. Oh! How often I feel like burying myself alive in Eucharistic solitude” (CO 2153). He preached on 16 July 1868 for the last time, then went to La Mure where he spent his last days.

The church of Saint Sulpice 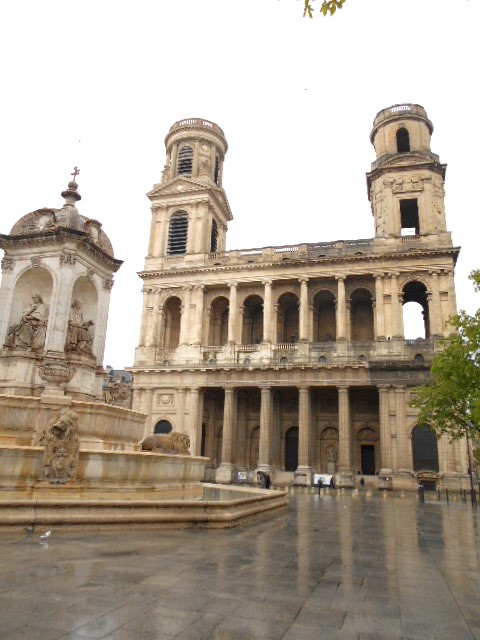 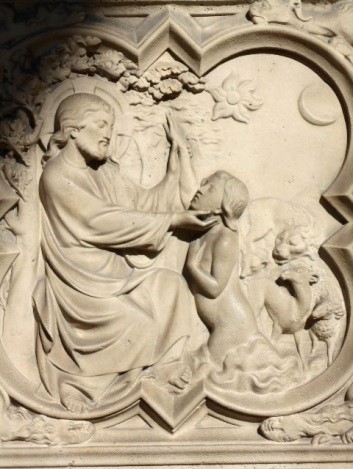 Our visits led us likewise to the Saint-Chapel, a chapel of St Louis with its amazing stained glass-windows extending loftily. The biblical scenes that follow one another, however, are difficult to discern because of the density of the tableaux. We also visited the church of Our Lady of the Miraculous Medal and strolled towards the cathedral of Notre Dame of Paris, which has been under reconstruction for many years.

(Saint-Chapel, ornament on the exterior facade)

The visit to this museum was a delightful feature of our journey. Graciously, in response to Father Manuel’s request, the team in charge of looking after the museum guided us and explained the various items as well as the technique of making a bronze bust of Father Eymard. This, one of the first works of the artist, is situated in a place of honour. Rodin was welcomed into the community of the religious of the Blessed Sacrament. Overwhelmed by his sister’s death, he considered entering religious life. When he left, Father Eymard counselled him to follow his artistic talent, implicitly a gift of God.

The Sister Servants of the Blessed Sacrament

Situated on number 20 rue Cortambert, the Sisters welcomed us and described their mission. The chapel, dedicated to Our Lady of the Blessed Sacrament, and a convent were built and on 29 June 1900 solemn exposition of the Blessed Sacrament began there. The eight sisters there today maintain and animate this oasis of prayer and formation. We warmly thank them for the time they spent with us in friendship, for the delicious meal they shared with us, but also for their great dedication to the Blessed Sacrament.

In this very beautiful chapel, built in 1876, situated on 23 Avenue de Friedland, lies the body of Father Eymard in a glass casket. Father Eymard consecrated twelve years of his life entirely offered to Jesus-Hostia and Paris was the cradle of his two congregations.

We were lodged with the religious of the Blessed Sacrament, being particularly welcomed by the fathers who allowed us to prepare the evening meals for everyone. A matter to mention is that Father Eugene had taken the trouble to do the shopping and we were able thus to share some time in fraternal conversation. We thank everyone here for this welcome, which enhanced the spiritual and amicable success of our pilgrimage.

Last modified on Wednesday, 17 November 2021 10:02
Tweet
Published in News
More in this category: « Pray, Share, Celebrate! 60th Foundation Anniversary of the Blessed Sacrament Novitiate in the Philippines Fraternities Décines, Colombier, Grenoble and La Mure with Bl. Sacrament Religious. Launch of our year 2021-2022 »
back to top