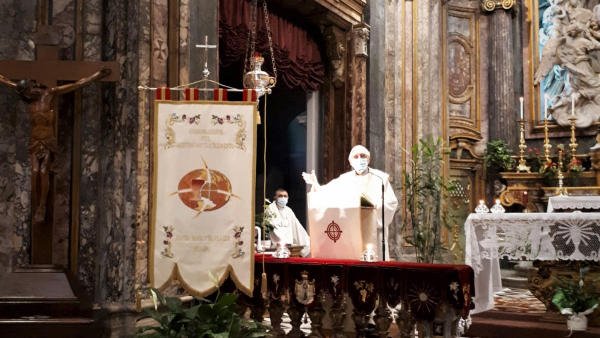 The solemnity of St Peter-Julian Eymard was characterised by the initiative, proposed by the zealous women, to remember the apostle of the Eucharist by a eucharistic day of prayerful adoration. This began with the celebration of Mass at 8 a.m., animated by a group of members of the Aggregation and the faithful. This celebration gave a taste of the gentleness of the Lord’s love, about which we sang “Taste and see how good the Lord is”, though with a certain sadness because of not having been able to participate also in communion with the Lord’s Blood. At the end of the Mass, as it has always been from 1901 to today, exposition of the Blessed Sacrament followed the singing of Morning Prayer, thus beginning adoration that continued until 24.00. The new banner of the Aggregation was placed next to the altar as a sign of belonging and reminder of the promise of commitment to the Eucharist at the centre of our life of faith, to journey forward in the eymardian eucharistic spirituality.

Welcoming worshipers at the door of the church was the icon of St Peter-Julian
holding the monstrance and the invitation “Come let us adore”.

This praise to the Father is through Jesus, who associated everyone with Himself so that his offering would be complete. Each one was turned to the Lord, uniting their lives, to unite them with that of Jesus, for the salvation of the world. The presence of the aggregates or others in the church for adoration throughout the day was good, at certain times numerous. It was lovely to see the faithful in an adoring and devout attitude.his is the exhortation to all to pause in adoration, and pour out the most beautiful sentiments of one’s heart. St Peter-Julian welcoming the aggregates gave them the task of loving the Lord, present in the Sacrament and repeated his challenge: “Jesus is there and calls you”, he is waiting for you. Certainly the Doxology at the conclusion of the Eucharistic Prayer of the Mass resounded in the worshipers minds: “Through Christ, with Christ and in Christ, to you God the Father Almighty, in the unity of the Holy Spirit, all honour and glory, for ever and ever”.

At 5.00 p.m. the Rosary was recited with the reflection on the mysteries taken from texts by St Peter-Julian. This was followed by the singing of Vespers of the Solemnity. At 6.00 p.m. there was the solemn celebration of the Eucharist. On the occasion of the Solemnity, the new banner of the Aggregation of the Blessed Sacrament of Santa Maria di Piazza, Turin, was presented to the aggregates and the faithful.

The Superior Fr Giulio Maccali invited us to enter into the mystery by letting ourselves be invaded by the Lord’s presence of among us. The aggregates were entrusted with animating the celebration which gave it solemnity.

At the end of the Mass, the Superior, on behalf of the community, paid tribute to all by presenting them with the recently edited biography of St Peter-Julian Eymard, written and re-edited by Fr André Guitton. This was a wonderful gesture of gratitude and esteem for the aggregates and for those who attend our church of Santa Maria di Piazza for prayer. Everyone appreciated the gesture and felt greatly moved on receiving such a valuable gift.

Furthermore, everyone admired the new banner that on the front bears the logo of the Blessed Sacrament and on the reverse side the image of Our Lady of the Blessed Sacrament and St Peter-Julian Eymard, which is copied from a painting in our church. It will be the standard that will represent the Aggregation in various circumstances and celebrations. 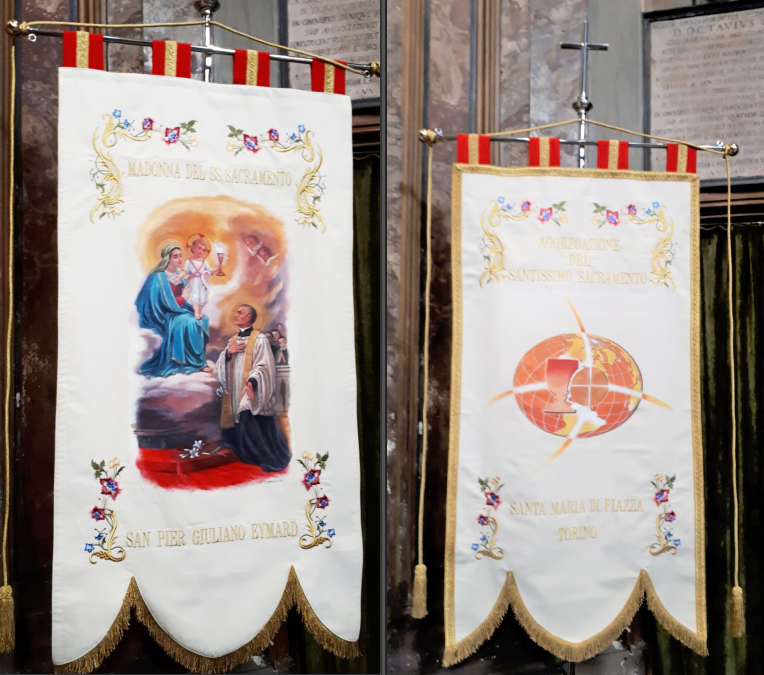 After the celebration, adoration continued until midnight, with many of the faithful present. Thus the eymardian family of Santa Maria honoured and celebrated its Founder.

This day of celebration for St Peter-Julian was enriched by some messages: the Eucharistic Day with many faithful taking turns in maintaining an extended prayer of adoration from 09.00 a.m. to 24.00 p.m.; the prayed Rosary with reflection on the mysteries taken from texts by St Peter-Julian; the singing of the Vespers of the Solemnity; the celebration of the Eucharist with the presentation of the new banner of the Aggregation of the Blessed Sacrament and the gift of the Founder’s biography to the faithful present at the feast.

Thanks be to the Lord. The invitation of the Saint always remains alive for those entering the church of Santa Maria, “come let us adore”, thus being enabled to experience the words of the psalmist: “Taste and see how good the Lord is”.

Last modified on Sunday, 03 October 2021 12:35
Tweet
Published in News
More in this category: « Pilgrimage in the steps of Saint Peter-Julian Eymard 22 to 28 August 2021 Aggregation of the Blessed Sacrament (SANTA MARIA DI PIAZZA - TURIN) »
back to top