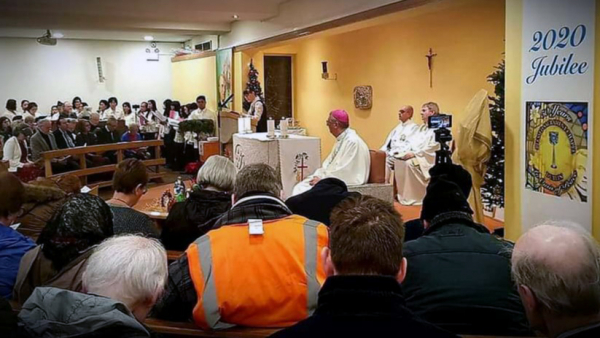 One hundred and fifty-nine years ago this week (12 December 1861) Fr. Eymard advised “Let the divine will of the moment be the pivotal point of your activities” (CO 1085). What St. Peter Julian communicated to Zenaide Blanc de St. Bonnet has been realized in Dublin. Long before 2020 began a group of ministers and worshippers based at the Blessed Sacrament Chapel began to meet and put together some plans so that the anniversary of the presence of SSS for fifty-years in Ireland could be celebrated as a Jubilee Year. Anniversaries remain important events, not least because they bring to light the landmarks that have shaped lives and identities. Some who were helping to plan the year have been involved in the life of our Dublin Chapels for many years; others -myself included-, are much newer faces to Ireland and the Blessed Sacrament Chapel, but recognize that it is an important venue that lives at the heart of this capital city.

With the forming of the working party a whole series of events to mark the Eucharistic mission of Eymard’s Congregation on this island were being planned and publicized. Public talks and lectures, a series of concerts, a Eucharistic procession through the streets, and an all-night vigil were being prepared. Archbishops and representatives from different kinds of ministries had accepted invitations to be involved. We were ready to launch on January 6th, 2020, the day fifty-years ago when the first Blessed Sacrament Chapel was opened on D’Olier Street on the other side of the Liffey River. In his homily that evening as he launched the Jubilee Year the Archbishop of Dublin expressed the following words which would take on much deeper significance as the year progressed:

“This Chapel is part of the mosaic of the new Ireland that we are challenged to create. It is an icon of a Church presence in a changing society. It represents not a dominant Church that tries to impose itself. It is a Church of welcome. It is a place where in the face of a world that finds it hard to find God, we are led to God by learning in all simplicity to pray and worship. The Chapel is a place where the eucharistic presence of Jesus reaches out and heals.”

The first events of the Jubilee year were up-and-running, and yet in the background the world was hearing with greater clarity that the COVID-19 virus was something to have greater impact upon everyday life than we had first imagined. By the time the end of March arrived all of the events that we had planned at the Chapel, including the Vocations and Faith Hub which was to have been our offering to young adults who populate the local Church had either been cancelled, indefinitely postponed or dramatically adapted.

Discerning God’s will in this moment was mapped out for us by both a series of government restrictions that have fluctuated during the year as well as taking stock of our primary responsibilities to our worshippers, many of whom were now beginning long-periods of social isolating. Finding ways to creatively connect with people who have made the Chapel their spiritual home became the new hallmark of the Jubilee year. It was important to utilize and invest in technology that could build bridges so that people could worship with us, whilst at the same time recognizing that large numbers of our community do not have access to the internet.

Suddenly what we had taken for granted became so vital: the ability to reach out online as well as more personally through a series of prepared mailings full of spiritual and practical resources with the elderly and housebound especially in mind. The celebration of the Jubilee Year here in Ireland was the realization that the hours of preparation for online ministries and the 2,300 packages that have been posted through people’s doors evoked something of St. Peter Julian’s creativity in reaching out to those enduring transition and turbulence. As a community we have been afforded the opportunity to entrust ourselves once again to simple methods for the greatest possible purposes.

As the Jubilee Year came to its end on the fifty-eighth anniversary of the Canonization of Peter Julian Eymard on December 9th, public worship had been reinstated for the second time in Ireland. As limited numbers gathered in the Chapel, we were joined online by others. As we continue to learn in all simplicity to master the gifts of prayer and worship, whilst recognizing that many people have found it challenging to find God in the events of 2020, I offered the invitation that dwells in St. Peter Julian’s living legacy as the way to walk out of our Jubilee and into the future:

“In a sense by celebrating our Golden Jubilee Year during nine-months of pandemic has brought a more genuine flavour to the kind of ministry that Fr. Eymard believed himself to be called, and the challenges he faced in building up the Congregation of the Blessed Sacrament in the middle of the nineteenth century. By letting the Eucharist ‘be’ the thanksgiving it is- then we are able to live in Jesus Christ entirely. That is the Jubilee Door to life that is never locked and bolted, but left open through which St. Peter Julian himself walked, and he invites us to do and become the same: to be people entirely rested in Christ and people of thanksgiving.”

Last modified on Tuesday, 29 December 2020 09:50
Tweet
Published in News
More in this category: « Celebration of the feast of the Vietnamese Martyrs Community of the parish of Our Lady of the Blessed Sacrament and Holy Canadian Martyrs, Rome »
back to top