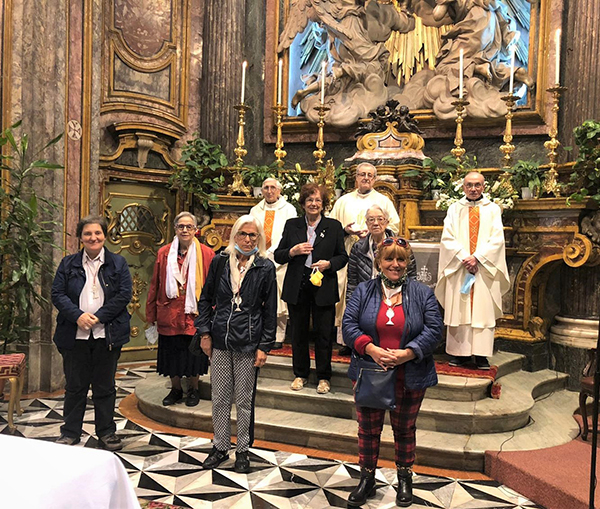 The Eymardian Family of Turin gathered on 29 September 2020 to celebrate festively the members of the Aggregation of the Blessed Sacrament who commemorated the 25th anniversary of making their promises. Every anniversary recalls the memory of a beautiful event that has been lived, the memory of which is kept the in one's soul, but it also holds a message for the present, an invitation to return to that experience by reliving the feelings experienced in one’s heart on that day. Every anniversary presents a motive for joy and festivity, awakening the desire to “bless” that day, so that the grace received may become a way of being grateful to God.

In the Eymardian Family the 29th of September is a day of ‘thanksgiving’ in remembering the 25 years of promises made and of belonging to the Aggregation of the Blessed Sacrament, while also the memorial of the religious profession of members of the community. This day unites the whole Eymardian Family in great gratitude to God for having called religious and lay persons to the “grace of the Eucharist.”

Even this year, despite the Covid-19, the community came together to hold the memorial of religious profession and recall the 25th anniversary of some aggregates’ making of their promises.

The celebration was particularly moving. It is beautiful after 25 years to recall that day on which a response was made to the Lord’s call, to dedicate some of one’s time to the great and at the same time humble gesture of adoration of the Blessed Sacrament, if possible in the church of Santa Maria. The ‘yes’ expressed then is continued each month, each week, every day, in accord with the choice, a ‘yes’ that is renewed with the same fervour and love. It is beautiful to hear the formula of the promise being pronounced: “I ….. to this scope express freely to continue to be part of the Aggregation of the Blessed Sacrament and to be inspired by its ‘Life Project’…” The temptation to leave the Aggregation is always at hand, to leave the path of growing in the eymardian eucharistic spirituality, to leave the catechesis provided on the fourth Sunday of every month, to cease the prayer of adoration because of the excuse of having so many things to do, to abandon commitment about living in the spirit of the cenacle and seeking of fraternity. But 29 September is also the day of renewing a desire to continue to express by one’s presence praise and glory to God through and together with the eucharistic Jesus.

On this day of festivity, this year, those who were celebrating, because of the pandemic, seated around the altar on which the Blessed Sacrament was exposed called to mind the image of the Apocalypse: the elders, angels and saints around the altar of the Lamb whom they adore.

The whole celebration was according to the prepared plan a succession of moments and signs that recalled the aggregates to living intensely the renewal of promises:

Singing the Magnificat, an aggregate recalling the 25 years of making the promise becomes aware and recognizes that God’s love has penetrated one’s heart, calling it to become a presence and witness of a mystery that has involved one’s life.

This whole spiritual richness then took shape in the solemn celebration of the Lord’s Passover, presided over by the Father Superior, the director of the Aggregation, who also received the renewal of the promises of all the aggregates gathered for the feast of the Eymardian Family.

What can we wish these aggregates? May they be, first of all, faithful and then go to prayer with a heart full of joy as they go to a festivity, members of the Aggregation and zealous women.

Tweet
Published in News
More in this category: « Farewell Fr. Justin Diaconal and Priestly Ordination »
back to top