A Different Way of Looking at Viruses 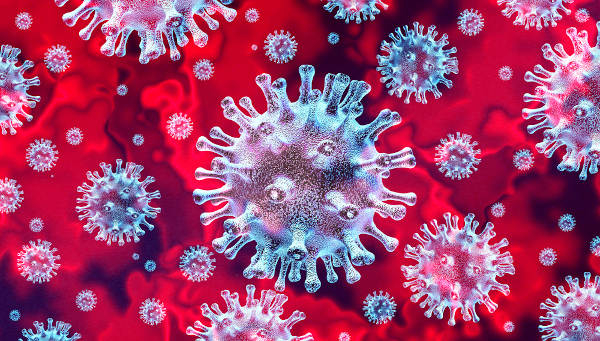 Throughout human history, humanity has tried to understand death and what threatens life in folklore, literature, and now cinema. These genres personify these threats in terms of the animal-inhuman, a werewolf, or lycanthrope; the dead, zombies; the non-dead, vampires; the non-living, a Frankenstein monster; the extra-terrestrial alien, and the never-living, a crazed robot. How can one portray or even conceive of the novel coronavirus - SARS COVID-2 causing COVID-19? This virus has spread across the globe in a few short months, sickening millions, and has the dubious distinction of not really being a living organism, many biologists say. Our immune system could handle a single virus or virion, it is the hundreds of thousands of virions created in a short period of time that harms our cells. Is this threat alive or dead?

We need to get some idea about what a virus is. Bacteria are simpler to deal with. Bacteria are microscopic living organisms, one-celled, that can be found everywhere. They can be dangerous, causing infection, or helpful in fermentation for wine and decomposition, like for mulch. Bacteria are alive. Viruses do not test for being alive. Viruses are not really considered alive, they are “pseudo-alive", said Eric Mendenhall, an associate professor of biological sciences at the University of Alabama in Huntsville. Life is a complicated reality; live organisms reflect that complexity in their structure. Smaller building blocks come together to make a larger entity. Even though viruses do this, have genes made from nucleic acids and a protective protein shell called a capsid, certain virus strains have an extra membrane (lipid bilayer) surrounding it made of smaller subunits called capsomeres. But this does not make them alive because of other reasons.

Living things must be made of cells. Viruses are not made out of cells. Living things reproduce. Viruses cannot reproduce on their own. Viruses do not have the constituent parts of a cell, they do not have the tools they need to copy their genes, much less create a whole new virion, a single virus particle. Viruses must use living host cells to create more virions. Viruses enter living cells and hijack a living host’s cellular equipment to copy viral information, build new capsids, and assemble everything together. The term replicate is better than reproduce to indicate viruses need a host cell to multiply.

Living things grow. Viruses do not grow but use the host cell’s energy and nutrients to become larger in size or more complex. Viruses manipulate host cells into building new viruses so each virion is created in its fully-formed state, and will neither increase in size or complexity throughout its existence. Viruses multiply at the host cell’s expense. Creating new virion units is a major undertaking, from building nucleic acids to putting capsids together which costs energy. All the energy that goes into this construction comes from the host. Viruses benefit from the use of energy and latch onto the host’s metabolism to get to it. So not living like a zombie, and not a changeable werewolf-like King Lycaon, turned into a wolf by Zeus, nor a parasitic vampire like Dracula or Nosferatu, the non-dead, how to conceive it? It is more like a robot than a living organism. Imagine all of the movies about robots and androids, the Terminator, Data from Star Trek, the robots in I, Robot, robots, fully formed relying on host materials to build and power themselves and can exist in two phases: the lytic phase (where the virus actively replicates in a host cell) and the lysogenic phase (where the viral DNA incorporates itself into the cell’s DNA and multiples whenever the cell multiplies). Sometimes a host does not support the virus to actively replicate, so it switches to the lysogenic phase when conditions are right. This maddening characteristic makes certain viruses so hard to eradicate.

This has implications on how to treat viral infections. Antibiotics treat bacterial infections and aim at killing the live bacteria. With viruses how do you kill something which is not exactly alive, to begin with? Antiviral medications attempt to disrupt the replication cycle or degrade the virus. Think of it like pushing the off button in the robot production line. For the time being, we can impede the replication of this crazy robot by not assisting the reproduction phase by social distancing, hand washing, and good disinfecting of surfaces and environments in which viruses accumulate, I hope this helps.

Tweet
Published in News
More in this category: « The Gift of self in an eymardian perspective The Coronavirus phenomenon: auspicious time for human relationships to flourish »
back to top