Annual Retreat of the Aggregation of the Blessed Sacrament of Turin 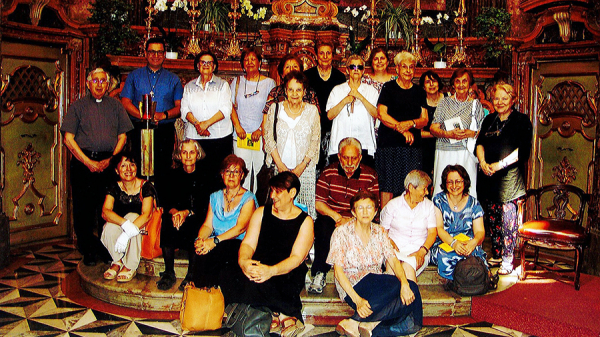 The “Life Project” reminds members of the Aggregation of the duty and necessity of ongoing formation in order to grow in the Eymardian eucharistic spirituality. We know how Father Eymard was very attentive to the formation of the laity’s commitment at various levels since to a great extent the sound outcome of activities depended on this formation. It is through prayer, listening to the word of God, reflection on it, meditation silence, eucharistic adoration and participation in the sacraments that an aggregate grows in the eucharistic spirituality and becomes formed as a part of the Aggregation. St Peter-Julian Eymard showed much care in the spiritual direction of the laity, as so many of his letters bear witness. A great deal of zeal in his preaching and his writings confirm this.

Thus, this year a retreat was arranged for aggregates in the first week of July, from the 1st to the 6th, divided into two courses – the first from 1-3, the second from 4-6. This was at the church of St Maria di Piazza at the house of the Blessed Sacrament community. The two courses were led by Fr Luca Zanchi, the superior of the Blessed Sacrament community Milan and parish priest of the St Angela Merici parish in Milan. The topic chosen was: “do this in memory of me…” – the implications of the Eucharist.

The following aspects of the Eucharist were dealt with:

First day: availability, under two headings in two meditations: Listening “everything has its time” according to the text of Lk 10:28-42; sharing on “a little becomes all” based on the text of Mt 14:13.21.

Second day: charity, under two headings in two meditations: Service “the difficulty of lowering oneself-humility” according to the text of Jn 13:1-20; charity “to be genuine” with the text of Rm 12:9-21.

Third day: mission, under two headings in two meditations: Trustworthiness “do whatever you say,” according to the text of Jn 2:1-12; mission “and now what awaits us?” with the text of Lk 24:13-35.

According to the schedule, Morning Prayer was recited at 10 a.m. and the first meditation followed by a time of silence, free time for reflection and personal prayer until 12 noon when Midday Prayer was recited. A packed lunch then was shared in the dining room followed by some free time. At 3 p.m. there was the second meditation. At 4 p.m. communal adoration led by Fr Luca was followed by the Rosary and Evening Prayer. The day closed with a solemn eucharistic celebration and greetings until the next day. Everyone had a copy of the brochure prepared by Fr Luca for the prayers of the various moments.

Participants said that these were three days of grace in which everyone was able to understand somewhat better what it means to celebrate, receive, adore the Eucharist. This implies being disposed to welcome it as a gift of the Father and learning how to live it in charity at the service of one’s brethren unto the gift of oneself in following Jesus, who gave himself for us. It commits us towards a joyous mission of proclaiming it as the sacrament of love and salvation that transforms the heart of the faithful to respond in love. The Eucharist is a gift of life that requires the gift of self for the glory of the Father, just like St Peter-Julian’s gift of self.

With his simple and clear words Fr Luca brought out that an aggregate must little by little enter ever more into the mystery of the Eucharist, by celebrating it above all as a mystery of salvation, by adoring it as a font of grace, by proclaiming and witnessing to it by one’s life and thus growing in the eucharistic spirituality according the charism of St Peter-Julian Eymard.

Tweet
Published in News
More in this category: « Youth Eucharistic Camp – First edition From Retreat to Renewal of Vows »
back to top