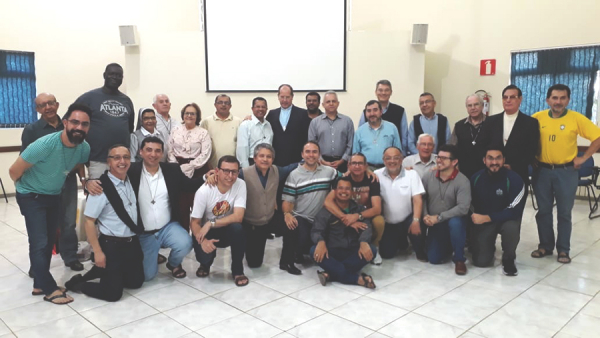 The Province of Our Lady of Guadalupe celebrated its annual assembly in Bel Horizonte, from July 1st to 5th 2019.

How good it is to meet you! Fr Provincial Marcelo Da Silva welcomed everyone and opened the assembly. He challenged the Assembly with Jesus’ words: “What are you looking for?” Greetings were given also by the Superior General of the Congregation, Fr Eugenio, who travelled from Rome and Fr José Antonio, the Latin American Consultor who came from the Meeting for Formation of young religious in Bogotá, Colombia.

The question “How did we arrive at the Assembly” opened many windows of discussion. Sharing the answers showed the rich life that we have in the Province.

The topic of abuses was dealt with from different aspects (psychological, canonical, ecclesial). There was a fraternal and open dialogue. What came from this to guide us in pursuing our formation? Many suggestions were provided. Fr Eugenio shared the following words: as the Apostle Paul said, each one should examine himself; we receive an invitation to conversion; community life is of great help; prayer before the Eucharist helps us to grow in fidelity and love. We were invited to follow the procedures of the local Episcopal Conferences. Victims are at the centre, just as Jesus placed the child at the centre.

Each cenacle talked about the communitarian Life Project: revision, strengths, progress. Proposals were made to adjust the project regarding abuses and what was discussed in the Assembly.

“A Religious, a Vocation,” as Fr Eugenio recalled, is a priority for the whole SSS, the Provinces and each cenacle must pray and work for vocations. Being an SSS Religious is a Eucharistic vocation. The world of vocations for the Blessed Sacrament was underlined and explained in the Assembly by the reports offered by the people responsible for vocations.

The Summit of the vocational talk happened with the witnessing of 5 young religious who participated at the meeting in Bogotá. How can we live the gift of self?

Thinking on the future of vocations: How can we be different vocationally? How can we call following Jesus’ style? Fr Marcelo, the Provincial, recalled Jesus said “What are you looking for”… and that created the vocational specificity.

A general vision regarding the economic situation in the light of mission. How does this look? How is it perceived? If a province has invested in formation, considering it worthwhile to devote material and spiritual resources, it is necessary to work both for First and Ongoing Formation by maintaining a steady path.

During the visit of Monsignor Walmor, the Archbishop of Belo Horizonte and President of the Brazilian Episcopal Conference, he expressed gratitude for the presence of the Blessed Sacrament Fathers in his Cathedral. He shared the challenges of the Church in his country and spoke about the coming Synod for Amazonia. He commented that popular religiosity, the Word of God and the Eucharist will be considered as evangelising tools in the Amazonian area.

On Thursday, with joy and fraternity, we shared supper together. The people participating in the Assembly celebrated the meeting and also had an opportunity to say goodbye. The pre-novitiate youth were present, sharing the supper and experiencing life together. Tomorrow, we said, we’ll return to each cenacle carrying the Eucharistic fire that Eymard shared.

Religious life, among us, is for you to be my brother. As in the Little Prince, the fox said: “How can I be captured by you?”

Tweet
Published in News
More in this category: « Evaluation of the CLAS meeting – young SSS religious Celebration of the Solemnity of Saint Peter Julian Eymard and Professions of Vows »
back to top