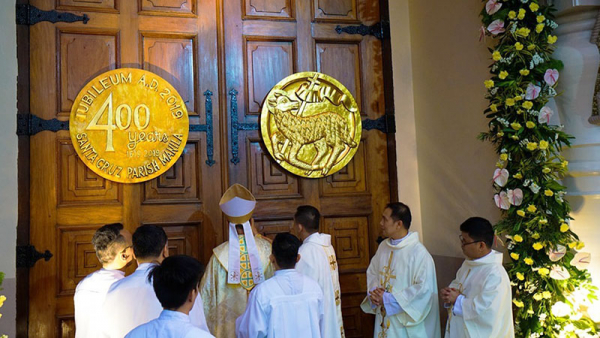 Santa Cruz Parish is located in the busiest commercial district in the city of Manila in the Philippines. It is notably the very first church administered by the American Blessed Sacrament Fathers and Brothers in the Philippines since 15th August 1957. Fr. Rosaire Morin was the first SSS parish priest.

The Philippines takes its name from Phillip II, who was king of Spain during the Spanish colonization of the islands in the 16th century. The Spanish missionaries introduced Christianity to the islands.

Santa Cruz Parish was erected on 20 June 1619. It was reported that the Jesuits were called to administer the parish primarily to look after the spiritual needs of the growing Chinese population near the church of Binondo, a few blocks away from this new church.

A replica of the image of Nuestra Señora del Pilar (Our Lady of the Pillar) in Zaragosa, Aragon, Spain was enshrined by the Jesuits in this church and in 1743, the Confraternity of Our Lady of the Pillar was canonically established. Nuestra Señora del Pilar eventually became the titular of the parish. More than a century later, a decree issued on 18 December 1984 by the late Archbishop of Manila Jaime Cardinal Sin reverted the name to Santa Cruz Parish. In the same decree, St Peter Julian Eymard was named as the second patron of the parish.

At about the same period, adoration chapels became popular in different parish churches. Some adorers from Santa Cruz Church became the prayer leaders when they returned to their respective parish churches.

In the early 1960s, the apse of the church was renovated to give more prominence to the tabernacle and the altar. Fr. Gabriel Casal, OSB designed the dome and the Byzantine glass mosaic of a sacrificial lamb whose blood flows like a river to the tabernacle amid a Filipino setting of mango, banana and fire trees which was executed by Ms. Elizabeth Chan from 1970 to 1972.

Santa Cruz Church became a center of Eucharistic evangelization and adoration and was informally recognized as a Shrine of the Blessed Sacrament. Realizing later that there was no official declaration but that it was solely based on tradition that the church is a shrine of the Blessed Sacrament, the parish pastoral council wrote a petition to the then parish priest, Rev. Fr. Francisco Mendoza, SSS to allow the council to work on the official recognition of the church as a national shrine.

Succeeding parish priests, Rev. Fr. Felix Elverio and Rev. Fr. Joseph Matitu prepared the church for compliance with the requirements of being a national shrine.

It was providential that under the administration of Rev. Fr Rudsend Paragas, SSS, the image of Nuestra Señora del Pilar was canonically crowned on 7 December 2017.

A few months later, the Archbishop of Manila, His Eminence Luis Antonio Cardinal Tagle, accepted our petition that the parish be declared an Archdiocesan Shrine of the Blessed Sacrament. The formal declaration was made on the Solemnity of Corpus Christi on June 3, 2018. The Reverend Fr. Rudsend Paragas, SSS, who is the parish priest, was installed by the Archbishop as the first rector of the archdiocesan shrine.

On June 20, 2019, the parish pastoral council launched a year-long celebration of the 400th Anniversary of the parish. His Excellency, Bishop Sofronio Bancud, SSS presided over the thanksgiving Mass and the blessing of the jubilee door. Bishop Bancud invited the faithful to focus their attention on the very essence of the celebration in spite of the distractions of daily living and concerns. “The church”, he said, “should keep its mission of bringing closer to the Lord those who are left and marginalized in our society.”

The festive celebration was a fruit of the several months of preparation by the parish pastoral council inspired by Fr. Rudsend Paragas, SSS and his supportive parish vicar, Rev. Fr. Lennen Deciar, SSS and, Rev. Fr Jonelito Sison, SSS, who is the priest assigned to assist in the parish.

A lot of people were deeply touched by the liturgy of the opening of the jubilee or holy door. The rain that poured right before the ceremony started failed to dampen the enthusiastic response of the lay faithful and priests who chose to remain outside the church to witness the solemn opening of the holy door despite the drizzles of rainwater.

The Holy Mass was made more a Eucharistic experience of joy and solemnity by the grand choir rendering beautiful liturgical music.

This is just the start of the year-long celebration. Much more is expected as we move forward to making our 400 years as a parish a truly Eucharistic experience in preparation for a renewed Eucharistic evangelization.