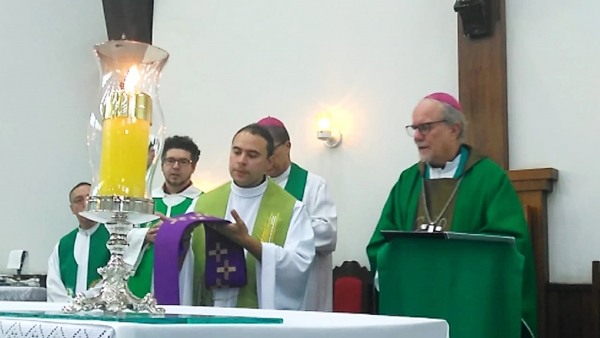 Last 9 February during the celebration at 6 p.m. at the Saint Peter-Julian Eymard Shrine of Adoration in Sete Lagoas, MG, Brazil, Father Jackson Frota sss received the role of Rector of the Eucharistic Shrine. Considered the heart of the diocese, the S.P.J.E. shrine daily welcomes hundreds of people from all sectors of the diocese, who in faith come to encounter Jesus in the intimacy of prayer and eucharistic adoration.

The moving celebration was presided by the Bishop of the Diocese of Sete Lagoas, Most Rev. Aloísio Vitral, who during his homily spoke of the importance that the Blessed Sacrament has for his life and vocation, as well as of his acquaintance and friendship with many of our Fathers, among whom, Most Rev. Jorge Alves Bezerra, the Bishop of the Diocese of Paracatú, who concelebrated and honoured Father Jackson by his presence. 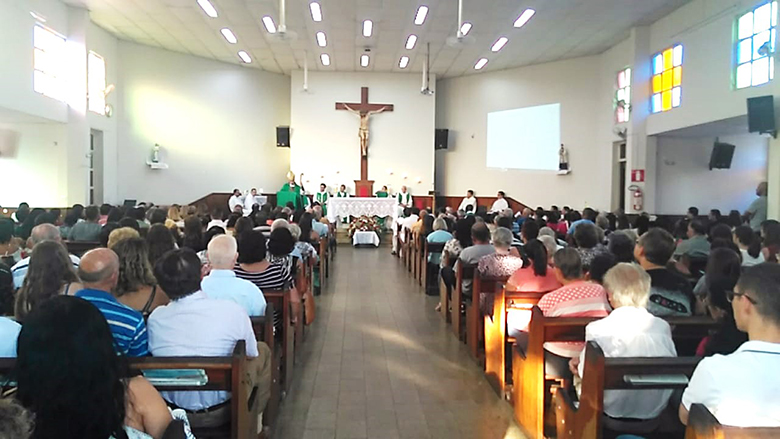 The following persons were also present at the celebration: Father Armindo Duque Magalhães, who especially travelled from Fortaleza, representing the Community of San Benedito and bearing with him the sincere affection of the whole community; Father Ismael Destefani from the Community of Rio de Janeiro; Fr. Vittório Baggi and Fr. Raimundo Dan; the Community Boa Viagem with the Postulants and Pre-novices; Father Marcelo Carlos Da Silva, the Provincial of the Congregation; members of the faithful and some lay men and women of the Aggregation of the Blessed Sacrament.

This was also a fitting occasion to welcome Father Juan Enrique Pacheco Chávez, who comes from Chile to form part of this community, to which his service adds strength as regards ministry and fraternal wellbeing.

All God’s blessings on this new community and through it may the Eucharist continue to be spread to the four corners of the world.

Tweet
Published in News
More in this category: « Promises of the Aggregates at Holy Spirit parish of Mpaka Vocation News from Mozambique »
back to top