Promises of the Aggregates at Holy Spirit parish of Mpaka 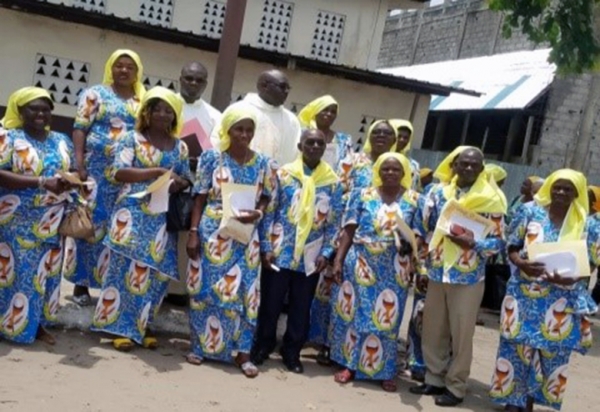 The Eymardian Family became enlarged on Saturday 16 February 2019 when thirteen Aggregates of the Blessed Sacrament made their promises; three of these were men, ten were women. The eucharistic celebration was presided by Father Jean Jacques Nkodia sss, the parish priest and superior of the community of Pointe Noire. On behalf of the Regional Superior he received their commitment.

At 10:30 am, though the weather was overcast, the Saint Esprit parish pulsated to the rhythm of the melodies of the Blessed Sacrament choir. In his exhortation taken from the Gospel of St John 6:41-51, Fr. Jean-Jacques said in substance: “Christ fulfilled the will of the Father on the Cross. He unconditionally agreed to give himself up for human-kind to have life, and life in God. However, the only condition he asks of us is to love one another. It is in this same perspective that the Eucharist is essentially the sacrament of love. Therefore, the fact that we love one another is but a consequence of being created in the image and likeness of God.”

Father Jean-Jacques went on to offer advice to the aggregates in bringing out a link between the text of the day and their commitment. He pointed out that an aggregate’s life must be tinged with the Eucharist through living the Eucharist according to its three dimensions, that is to say, through participating in the Mass, spending time in adoration and bearing witness to the Eucharist in the society. In this way, Saint Peter-Julian is our model par excellence. And he continued by asking all to live their status as Aggregates in accordance with the Life Project.

The new members had prepared spiritually for making their promises by a three-day spiritual retreat at St. John the Baptist Parish in Nzassi, a parish run by the diocesan priests of Pointe Noire on the Congo/ Angola border. It was animated by Brother Ephrem Uldaric Mabika sss, a religious integrated in the pastoral and communal work of the community of Pointe Noire. The theme was the Eucharist, the source of our life, which Brother Ephrem based on the texts about the Burning Bush (Ex 3:1-10) and about the Samaritan woman (Jn 4:1-42). He ended his talks with the question about knowing what the Eucharist gives us to live. In short, the Eucharist is the Passover that unites our life, it constitutes the most perfect realisation of the Church and it is the celebration in which is summarized all that is most essential in the life of the Church.

After the thanksgiving the person in charge of the group of Aggregates spoke, thanking first the Lord, who is the Teacher of life and Author of the vocations, then Father Jean-Jacques for having trust in them, then the preacher of the retreat and finally those who took part in the liturgy. The parish priest of Saint Esprit then expressed gratitude in turn to everyone for the success of the day and invited the new members to kindle the Eucharistic fire in all corners of the world. It was with these words that the celebration ended.

On leaving, the new Aggregates were congratulated by the other Aggregates, and a family photo was taken bringing the liturgical celebration to a close. Refreshments were provided by the community as a sign of fraternity and solidarity between members of the same family.

We recalled also that on the same date Father Jean-Jacques was celebrating his birthday. The meal thus commemorated these two festivities in joy that spread through the walls of the SSS community of Pointe Noire.

We end our account with Saint Peter-Julian Eymard’s greeting to the Virgin Mary, Our Lady of the Blessed Sacrament: “Let us rejoice. Let us greet the beautiful day of Mary, the joy of heaven, the consolation of the earth, the terror of hell. Finally here she is the strong woman, the true mother of the living, the predestined mother of the Messiah, Jesus Christ. She has in her all the qualities of greatness.” (cf. PO 15,1).

May Christ live forever in the Most Blessed Sacrament. May the Eymardian Family live and increase.

Tweet
Published in News
More in this category: « An Experience of Transfiguration in My Uganda Mission Father Jackson assumes Rectorship of the Eucharistic Shrine of Saint Peter-Julian Eymard in Sete Lagoas »
back to top