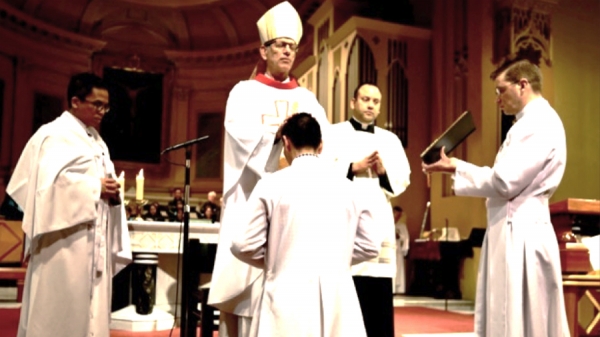 In his short “thank you” speech at the end of the ordination Eucharist, Ben Ho SSS observed that he was the first deacon to be ordained at St Francis’ since last century. A welcome change! For this and many other reasons, it was a joyful celebration. On the 10th of June 2017, a full church of family, friends, associates, Province religious and St Francis’ regulars, along with a cohort of concelebrants from Melbourne’s theological institutes and religious communities, all under the leadership of auxiliary bishop Mark Edwards, happily participated in the well-orchestrated liturgy.

A highlight for many would have been the colourful contribution of the augmented Youth Choir. Few worshippers would ever have heard the lively jazz-inspired Mass setting by Bob Chilcott or the stirring Swahili Lord’s Prayer set by Christopher Tin with which the ordination concluded, but they are unlikely to forget them. Other elements of the liturgy were by local composer Christopher Willcock SJ who was one of the concelebrants. There was ample opportunity for the congregation to join in acclamations and refrains and hymns, and join in they did. 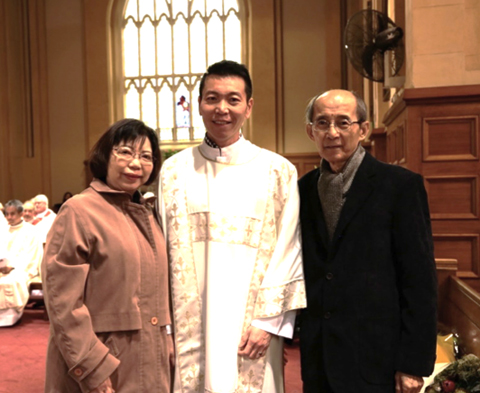 The first reading, a passage from the book of Tobit in which the angel Raphael offers parting advice to Tobit and his son Tobias, was jointly read by Ben’s friend Mike and his young son Robbie. The gospel of the day recorded Jesus’ critical comparison of the wealthy who gave of their surplus to the temple treasury with the poor widow who gave all she had to live on. In his homily, Bishop Edwards stressed the centrality of preaching in the deacon’s ministry. The role of the deacon, the bishop said, was to assist people to make the journey of conversion from the stance of the wealthy to that of the widow. He concluded with the admonition that comes later in the ordination when the deacon is given the book of the gospels: “Believe what you read, teach what you believe, and practice what you teach”.

Ben’s parents John and Irene came from Singapore to be present at their son’s ordination. They assisted him with vesting in the dalmatic and later brought up the gifts to the altar.

The spirit of celebration extended beyond the liturgy itself to the reception in the Pastoral Centre. Thanks to Ben himself and St Francis’ staff members, the provisions were plentiful and tasty. In sum, Ben Ho’s ordination as a deacon was an event that uplifted spirits and nourished hearts. May God bless Ben with joy and peace in his ministry of word, sacrament and service.

Last modified on Sunday, 16 July 2017 09:58
Tweet
Published in Archives
More in this category: « Eucharistic Day Paying tribute to a forgotten pioneer: the unveiling and blessing of Darien Pullen’s sculpture of Patrick Bonaventure Geoghegan OSF »
back to top