Paying tribute to a forgotten pioneer: the unveiling and blessing of Darien Pullen’s sculpture of Patrick Bonaventure Geoghegan OSF

About a hundred people – including several Franciscans and a contingent from the Williamstown parish where Geoghegan served as parish priest (1853-1860) – gathered for the event. Ken Boland SSS welcomed everyone on the Provincial’s behalf, while lamenting the untimely death of the project’s instigator, Pat Negri SSS. 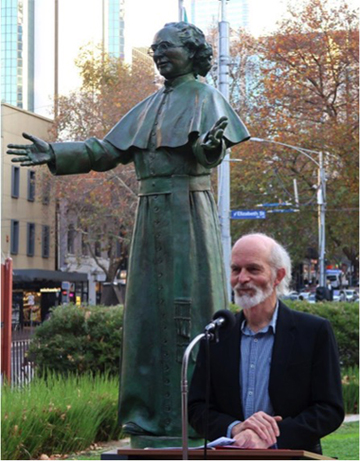 In his occasional address, Matthew Beckmann OFM traced Fr Geoghegan’s journey through life until his ministry in Melbourne. Remarkably he left behind the bitter sectarianism and anti-Irish bigotry of the United Kingdom and brought to Melbourne a free spirit of inclusion and respect for all. This was reflected not only in his building a “plain commodious” church suited to the early Melbourne community, but in pioneering efforts in education and health care.

Once the statue was unveiled, sculptor Darien Pullen spoke. He paid tribute to Pat Negri SSS for his wise guidance and to Damien Cash for his forensic research into Geoghegan’s life. His sculpture sought to capture his subject’s character as an active, open, warm and generous man, with arms stretched out in welcome and his face showing a hint of a smile.

The blessing rite followed, with some short scripture texts, the blessing proper, a set of intercessions, the Lord’s Prayer and a final blessing. Bishop Peter Elliott introduced all this by speaking of the significant role played by St Francis’ Church in his Anglican family and in his own life of faith.

The Anglican Archbishop Philip Freier made the already historic event all the more memorable. He said how glad and grateful he was to be present at “a very reconciling moment” because the first Anglican bishop of Melbourne, Dr Charles Perry (1807-1891), had displayed a lack of charity and grace in refusing to receive the welcome of the friendly and open-minded Fr Geoghegan in January 1848. Archbishop Freier’s warmth and ease certainly righted that wrong.

Fr Geoghegan’s prayer at the end of his homily at the laying of the foundation stone in 1841 was that Haggai’s prophecy – “in this place I will give peace, saith the Lord of Hosts” – would begin to be fulfilled. It certainly was on Pentecost Sunday 2017.